We've listed out some of the PoE currency value list & exchange rates. You must know the value of your currency items before exchanging them to other items. In the marketplace, Chaos Orb and Exalted Orb are the standard currency items. For a low-tier currency, you can exchange for Chaos Orbs, and then exchange to Exalted Orbs.

The following Hierarchy list is the PoE currency exchange rates in the trade marketplace. Chaos Orb is the standard currency. Mirror of Kalandra is the most expensive currency item in the Path of Exile which worth thousands of Chaos Orbs.

If you've accumulated a few of a type of currency, don't be afraid to try using it on an item. Sometimes the results will surprise you!

You can modify a vast number of objects in Path of Exile using the various orbs, scrolls, essences, whetstones and other stacking consumables. Collectively these items are referred to as "Currency", as they are also used to trade and barter with both NPCs and other players. At higher levels you might find currencies that other players value highly. The Orb of Transmutation, Orb of Alteration and Orb of Augmentation are great items to carry and use during your journey. They can be used to upgrade normal items to magic and to reroll or change the mods on magic items, and they're common enough that you can pretty quickly replace whatever you use. Using these currencies on flasks can let you customize their behaviour. If you're in need of a damage boost, try using them on a weapon base-type that is close to your level. Sometimes a magic item with the right mods is better than a rare item with the wrong ones.

Even strongboxes can be modified with currency. Keeping some with you will give you a degree of control over the contents of the strongboxes you come across.

In the below, I have listed the most common currency and its usage. From this basic PoE currency guide, you will enjoy the Path of Exile better. Hoping this guide will help you farming more currency items and win the battle.

Scroll of Wisdom is the most common PoE currency that can be used to identify an unidentified item. The drop level is 1. It is recommended to identify any above magic items before selling to a vendor.

Portal Scroll can create a 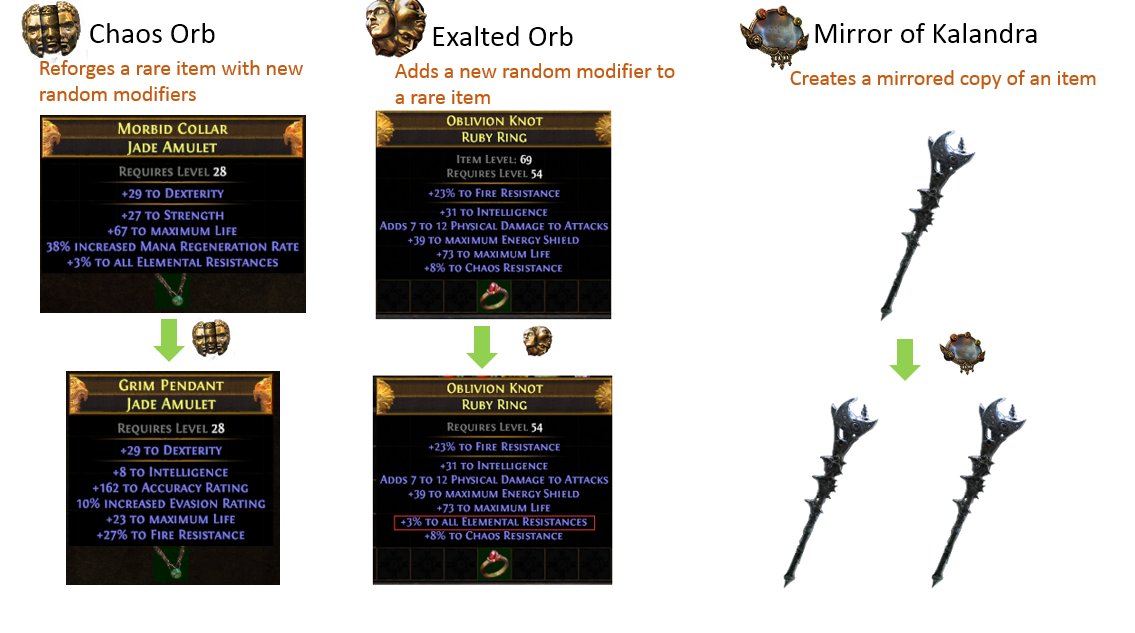 These orbs play an important role in the trading economy. Chaos Orbs are the “silver standard” in the trade marketplace and are the most common trading currency. Exalted Orbs are high-value currency and regarded as the “gold standard” currency for trading.

Mirror of Kalandra is an extreme rarity and regarded the most valuable PoE currency.
1x

Chaos Orb re-rolls a rare item with new random modifiers. The currency also rerolls the number of modifiers. The results are unpredictable. Therefore, getting the desired affix is not easy.

Mirror of Kalandra often referred to Mirror. The mirror creates a duplicate of an item. The duplicate is as same as the old item. Since the price of

Mirror of Kalandra is the most expensive, it is only applied for the best value items. 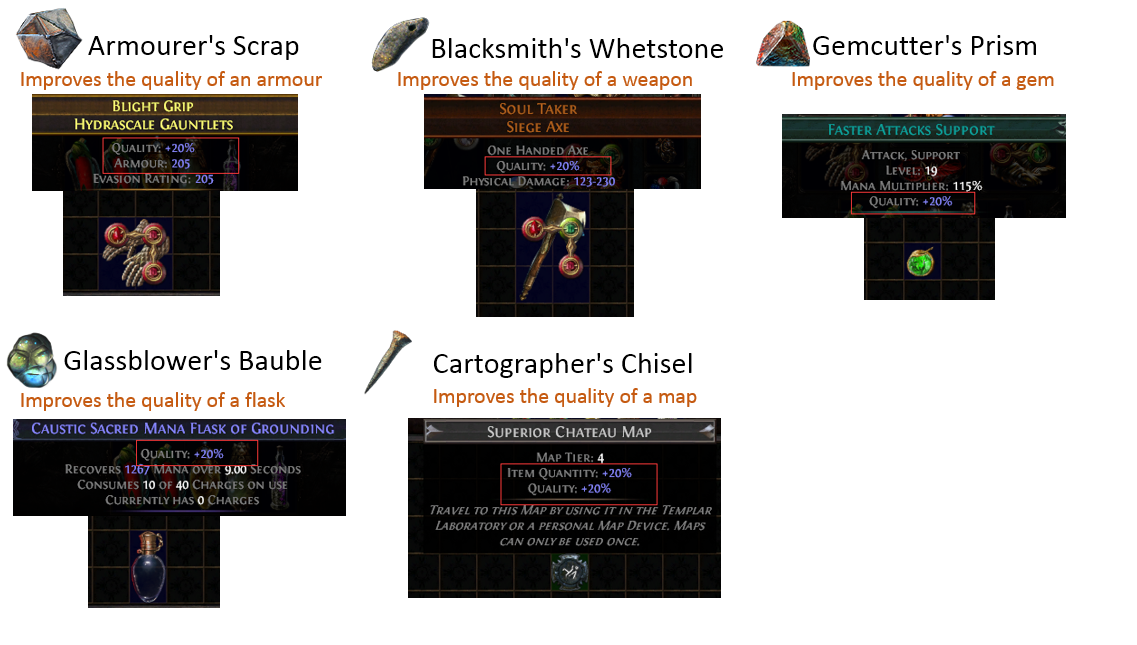 These currencies improve the quality of normal items by 5%, magic items by 2%, and rare and unique items by 1%. Maximum quality is 20%.

Armourer’s Scrap increases the quality of a piece of armour and the value of Armour. It can apply for Body Armour, Boots, Gloves, Helmet, Shield.

Blacksmith’s Whetstone increases the quality of a weapon and the value of Physical Damage. Weapons include Axe, Claw, Dagger, Mace, Staff, Sword, Wand.

Gemcutter’s Prism abbreviates as GCP and improves the quality of a gem. Different gems have different effects.

Glassblower’s Bauble improves the quality of a flask and extends its duration.

Cartographer’s Chisel improves the quality of a map and increases the map’s item quantity. 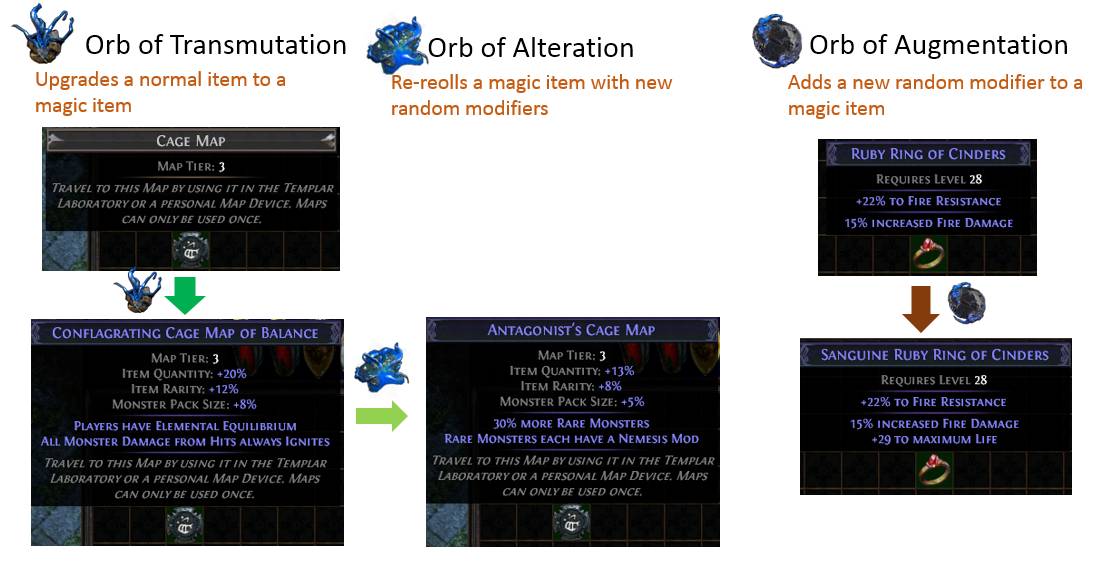 Orb of Transmutation upgrades a normal item to a magic item with random modifiers.

Orb of Augmentation adds a new modifier to a magic item. The currency can be only used on items with one modifier.

Orb of Chance upgrades a normal item to a random rarity, most commonly a magic item, uncommonly a rare item, has the low chance to obtain a unique item.

Orb of Alchemy upgrades a normal item to a rare item with random modifiers.

Regal Orb upgrades a magic item to a rare item and adds a new random modifier. 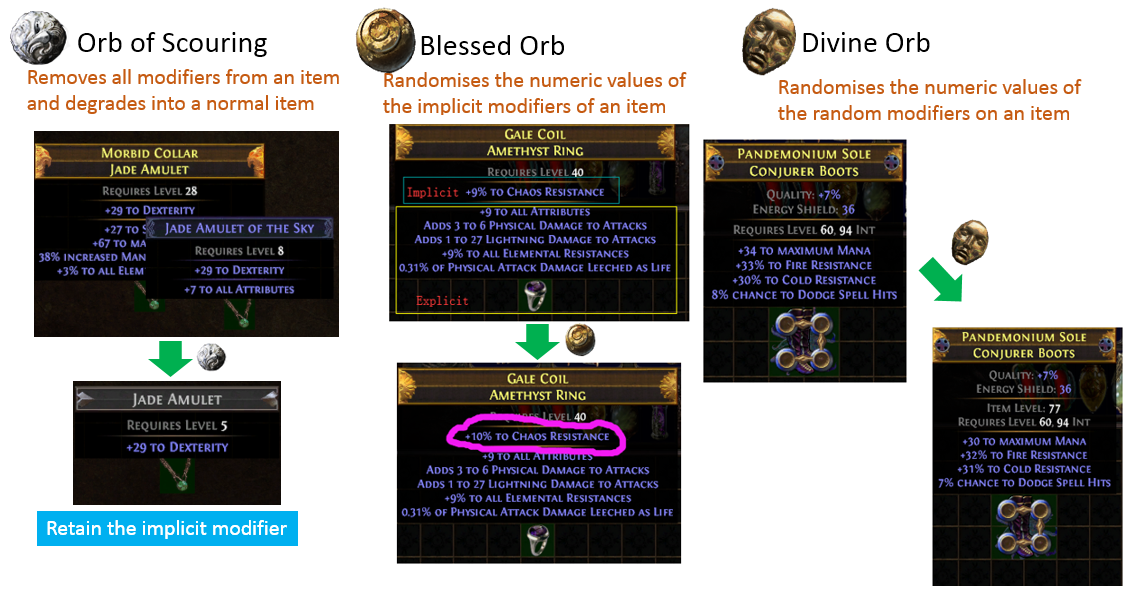 Orb of Scouring remove all modifiers from a magic or rare item and degrade into a normal item. The original implicit modifier, quality, sockets, and links are retained.

Divine Orb re-rolls the values of explicit values of modifiers. This can only be used on magic, rare, or unique items. Only the values of affixes that have a range of values will be randomized. A

Divine Orb will not change the tier of the affix; it will only re-roll within its current tier.

Orb of Fusing re-rolls the links between sockets on an item. The number and color of sockets are unchanged. Quality increases the chance to get more links.

Vaal Orb corrupts an item with an unpredictable result. The new item may be more powerful, maybe degrade into a new item. Once the item is corrupted, it can not be modified again.

Silver Coin is not a crafting currency and can be exchanged for prophecies with Navali.

Blessing currency obtained by defeating Breachlords. It can upgrade a breach unique item to a more powerful version.

Delirium Orbs are currency items that can be applied to maps to add layers of Delirium and grant specific rewards. Delirium Orbs can only be found in the temporary Delirium leagues.

Catalysts is the new currency in the Metamorph league. It give a quality stat to jewelry(ring, amulet or belt), increasing the magnitude of specified modifier types and the likeliness of rolling those mods.

Oil is the new currency in PoE Blight. A oil can be combined with other Oils at Cassia to Enchant Blight maps, rings, amulets or blight unique items in order to add new modifiers or the effect of a passive skill:

Blight maps can have up to 3 anointments at a time. Anointments on equipment take up the enchantment slot. Allocated passive nodes behave as if the node were taken manually. In other words, socketing a Timeless Jewel and anointing a passive node will grant the new, transformed modifiers. It will not grant the old, original modifiers.