Delirium Orbs are currency items that can be applied to maps to add layers of Delirium and grant specific rewards. Delirium Orbs can only be found in the temporary Delirium leagues.

How to Farm Currency in Delirium?

The easy way to get currency is bying killing monster and picking up their loots. You need to build a powerful character to increase your clearing map speed.

There are some ways to start a Delirium league that will eventually meet all the needs, but not very quickly. They may gain enough currency to allow you to build a new character that is fully focused on generating Orbs and items, which is not possible as a starter of the Delirium.

There are also many builds that focus on generating Orbs(usually, they have good speed and mobility, but a single goal is poor, sometimes even fragile), some of which are well for beginners(while others require an initial investment to be truly successful).

Farming currency is usually done by running maps with a large number of monsters and item quantity modifiers as fast as possible, often skipping bosses or rare species to get as many currency drops as possible per hour. In general, this is done in a low-level map, or a map with a higher level of divination cards, which is not required in a higher level, but you do not need to run a high-level map for currency, so these builds can be optimized to run simple maps quickly.

Fine Delirium Orb is a stackable currency. It was introduced from PoE 3.10(Delirium League). The price of

The used percentage of Fine Delirium Orb is 10.40(The highest).

How to use Fine Delirium Orb?

It modifies a Map item adding layers of Delirium with the Currency Items reward type. Right click this item then left click a Map item to apply it. Can apply up to 5 to a single Map item. Shift click to unstack. 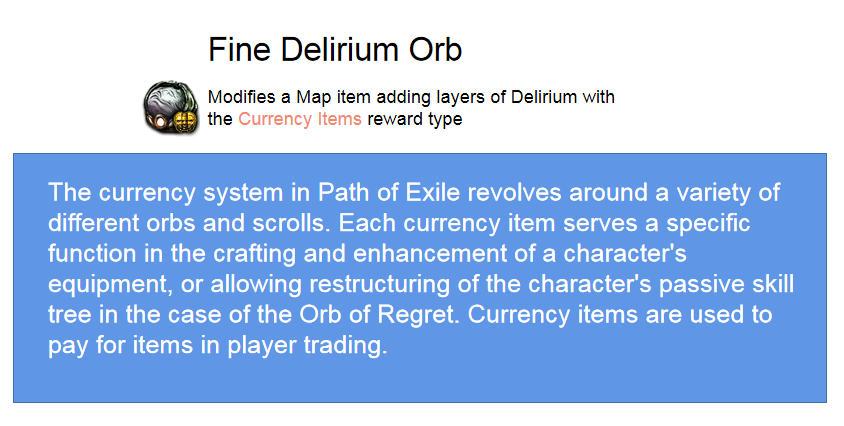 The currency system in Path of Exile revolves around a variety of different orbs and scrolls. Each currency item serves a specific function in the crafting and enhancement of a character’s equipment, or allowing restructuring of the character’s passive skill tree in the case of the

Orb of Regret. Currency items are used to pay for items in player trading.

Currency items can be found as drops from monsters or chests, bought directly from different vendors in town, or received through the use of the vendor recipe system by trading specific configurations of items to any town vendor. Currency items play a large role in the player to player trading system, with rare orbs able to be traded for powerful equipment, or even other types of orbs that a player might need at the time for crafting.