Defeat a Metamorph which has 5 different Rare modifiers

Metamorphs are enemies that constantly change forms, using the moves of enemies it acquired the parts of, even unique bosses. Metamorphs drop loot based on the parts used, which can include Catalysts that give a quality stat to jewelry, increasing the magnitude of specified modifier types and the likeliness of rolling those mods.

Metamorph Samples refer to the 5 types of items from the in-game Metamorph mechanics: Brain, Eye, Heart, Lung and Liver. 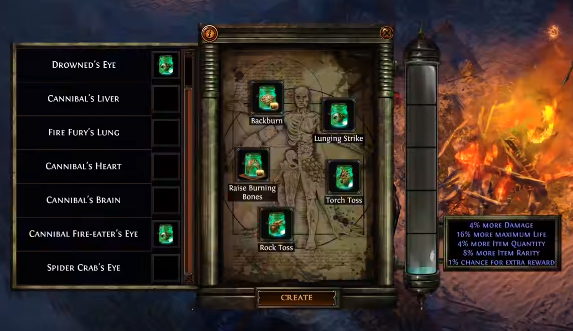 Players can use any combination of a set of organs to create the Metamorph monster. Each organ determines the attacks the Metamorph uses, as well as the monster modifiers it has. Sometimes an organ will contain an additional item drop bonus. Moreover, a meter to the right fills based on sample rarity, which increases the monster’s overall stats and item drops. Organs from higher rarity monsters will give larger increases to this meter. If the meter is filled as well as using at least one map boss sample, the Metamorph will drop an itemized organ sample, named after the name of the map boss, which can be placed in player’s inventory. Note that in some cases, even in a fully cleared map, there are not enough rare and unique organ samples to fully fill the meter, due to external factors such as map rarity, map mods, map tier and pack size. Only one Metamorph boss can be constructed per a map instance, and only the itemized organ(s) can be transferred out of the zone instance. Player can boost the drop of itemized organs by using Metamorph Scarab.

2.1 Defeat a Metamorph which has 5 different Rare modifiers

Sentinels can be deployed while engaging in other league content, so you can juice the risk and reward to quite crazy levels. For example, you could enter a Mirror of Delirium, trigger a Breach and deploy your Sentinel at the same time, causing the monsters to have three significant modifiers to both their difficulty and rewards. There are only a few specific areas that Sentinels can’t be deployed in, mostly for technical reasons, and those are: unique maps, pinnacle Atlas bosses and the Simulacrum.

Pandemonium Sentinel empowers a wide swath of monsters at once in a quick burst.

2.2 Defeat a Metamorph and a Rogue Metamorph within five seconds of one another

Escaped Experiment is a Atlas notable passive skill. It grants Areas have 20% chance to contain a rogue Metamorph.

Metamorph Scarab is a map fragment. Placing it along with a map into a Map Device, it augments the map for the following effects:

Defeat each of the following targets while affected by the Covetous Shrine buff.

All That Glitters is an Atlas passive: Shrines in Areas have 10% chance to be a Covetous Shrine.

Catalysts are currency items that add quality to jewellery. Quality on jewellery instead improves the effect of the implicit and explicit modifiers of the specified type and increases the chances of gaining those types of affixes from crafting.

Catalysts are acquired by defeating metamorphs in maps with organ parts that specify that they drop catalysts.

Using a different type of catalyst on an item that has quality will set the previous quality back.