Simulacrum is a map fragment. Use a Simulacrum in a map device to open portals to various high level areas: Lunacy's Watch, The Bridge Enraptured, The Syndrome Encampment, Hysteriagate or Oriath Delusion.

There are a total of 20 waves of enemies to defeat. Interacting with the Strangely Familiar Entity will summon the wave. Each wave increases the difficulty and rewards. Higher waves add additional monster modifiers and increases the level of Delirium. Simulacrum drops: Once the entire wave of enemies is cleared, it will drop all the loot listed. A Stash is available in the zone, allowing you to transfer items between waves. Starting a new wave will destroy all items on the ground.

How to get Simulacrum

You can get more Simulacrum and Simulacrum Splinter from a farming map with high monster density, such as Tropical Island Map, Lair Map (Delirium), Promenade Map.

The Simulacrum is difficult to survive. It requires a really good build to beat it because of the tremendous degen-damage deal from the bosses and the delirium boss(11th wave), also the chance of IMPALE from the monster. You can see the Ethereal Knives skill build for farming Simulacrum.

Complete each of the following Encounters in the Simulacrum.

1. Complete a wave of monsters which spawns two bosses in the Simulacrum

There's a chance where 2 delirium bosses will spawn around after wave 18th, and the fight is very hectic.

2. Obtain a Rampage Streak of 300 in the Simulacrum

It can be done by equipping rampage gear such as Bisco's Leash or Sinvicta's Mettle, let the rampage effect start then switch back to your main equipment quickly, and then continuing killing the bosses and start the next phase instantly to keep the rampage number going till 300.

That's 5 runs on the Simulacrum map if your build can do the full run(20 waves). For a decent build, it should do around 10 runs on this map that's roughly 10 waves per map, nonetheless, 100 is an achievable number for a normal player.

Normal. Require a bit of grind on the league-exclusive-unique-map and also a GOOD build to do for the double delirium boss challenge. We might need to invite a pro player to help to deal with that, the other 2 challenges are achievable with a decent build.

Defeat 750 waves of monsters in the Simulacrum

An upgrade version of the Simulacrum II challenge, the required amount to farming this map is roughly around 75 times for a decent build(10+ waves per map) and 38 times for a good build(20 wavers per map). It is really hard to fight, but if you like the new league mechanic then it should be achievable.

How players are faring in the Simulacrum?

Let's take a look at how players are faring in the Simulacrum. We're going to look at a breakdown of waves started by the Wave Number, and will also look at completion rates for a given wave (as well as how many players are able to complete all 20 waves of the Simulacrum). 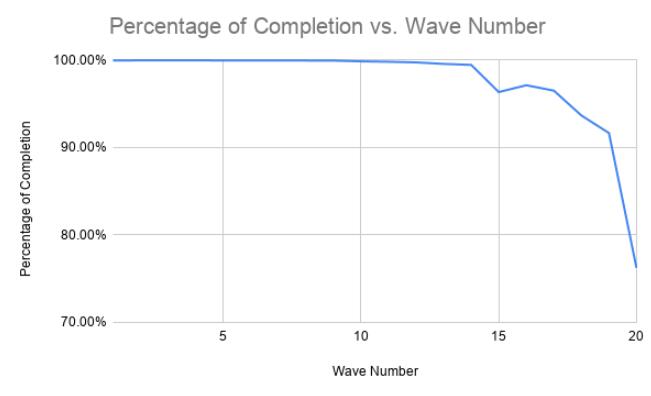 Right off the bat, we can see that 813,604 Simulacrum areas have been opened to date. We can see that there is a very high rate of completion for many of the early waves.

At wave 15, we see a big dip (relative to previous completion rates). This is likely related to the fact that wave 15 guarantees Omniphobia, Fear Manifest will spawn if they haven't already spawned and also introduces a chance for Kosis, The Revelation to spawn; Delirium bosses are quite difficult and present the first major challenge of the Simulacrum. That said, the majority of players are able to venture onwards after wave 15.

Things become much harder as players get to wave 18, where an increased chance for bosses to spawn, alongside increasing Deliriousness, becomes a major factor.

Wave 20 guarantees that Kosis, The Revelation will spawn if it hasn't already. As we can clearly see, this boss, combined with maximum Deliriousness, presents a significant challenge, where only 76% of players that attempt wave 20 successfully complete it.

If we compare the total number of successful wave 20 completions (463,491) to the number of Simulacrums started (813,604), we can see that 57% of Simulacrums that are started are successfully completed. While this seems like a low number, it's important to note that being unable to complete wave 20 just means that you miss out on rewards from that wave, rather than the entire area.

The Escape is a divination card. A set of five can be exchanged for Seven-League Step. It can be dropped in the Simulacrum areas.

Ethereal Knives build is 16%. You can use this skill to fight 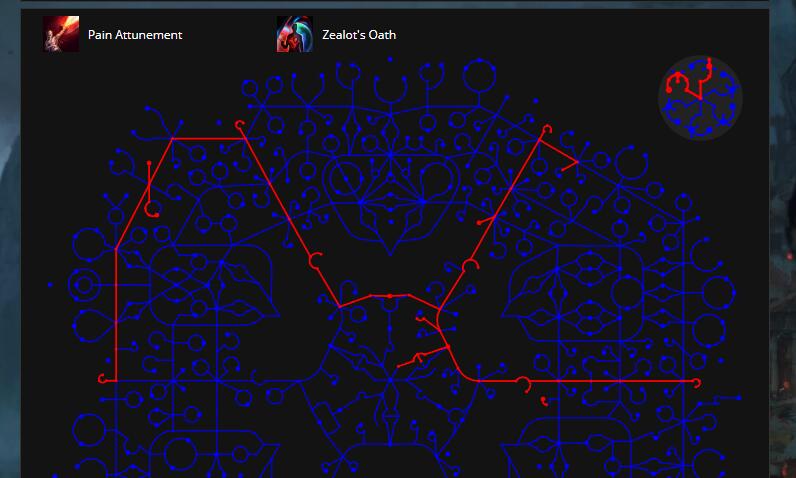