Chaos Orb is a great useful currency in Path of Exile. The most common usage includes crafting and exchange currency.

How to use Path of Exile Chaos Orb? Right click this item then left click a rare item to apply it. Shift-click to unstack.

Chaos Orbs are very useful in crafting, as they reroll all modifiers (and the number of modifiers) on a rare item. This makes for unpredictable results, so getting a specific modifier is not easy. Using multiple

Chaos Orbs on a piece of equipment in the hopes of getting at least a few good modifiers is called ‘Chaos spamming’.

These orbs also play an important role in trading. They are the “silver standard” in the player-driven economy and are often used to buy low to mid-tier items.

You can make recipes to get

Chaos Orbs. These recipes require a full set of rare items. A full set is capable of filling all item slots in the inventory screen.

The type of currency produced depends on the item with the lowest item level in the set, and the quantity on whether they are all unidentified and/or 20% quality:

While using this recipe, the prophecy

A Valuable Combination can add extra

Note: If the chaos orb recipe has a rare item below 60, then you have the chance to downgrade to an

Orb of Chance. That is the reason someone finds chaos orb recipe not working. 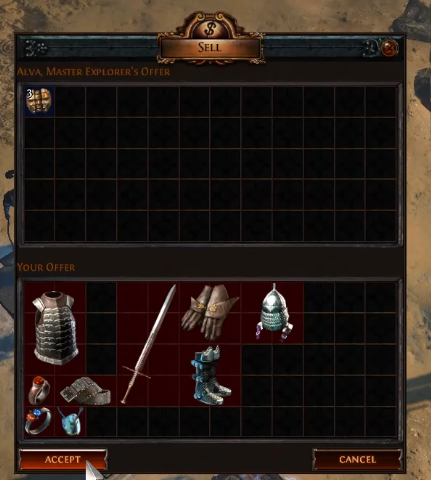 This is one of my Chaos Orb Recipe list: 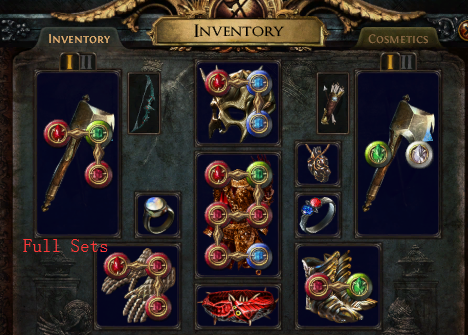 Chaos Orb Recipe not Working? Sometimes, you may find the problem of “PoE chaos orb recipe not working”. In this case, maybe “Full Rare Sets” is not right or one of the item’s levels < 60. You can hold the ALT button to check the item level.

How to get chaos orb in the path of exile? You can farm chaos orb by slain monsters, buy from other sellers, make chaos orb recipe, exchange divination cards. Chaos orb can be found in many maps, and easily farm. So, the simplest way to farming chaos orb is to kill more monsters in maps, open more strongboxes, clear map fastly.

Chaos Orb Item Level is 12. According to Reddit statistics, chaos orb drop rate is 1.652%. You can farm

20 Chaos Shards will combine to a

A set of 5 Emperor’s Luck divination cards can be exchanged for 5 random currency.

A Valuable Combination is a prophecy.

Chaos Orbs from seller with cheap prices as well.

Chaos Orbs to an exalted orb with other players.

Exalted Orb and Chaos orb are all used to change rare item. But

Exalted Orb adds new mods to a rare item. If the rare item has 6 mods, then

Exalted Orb are all common currency in Path of Exile. You can exchange your low-tier currency and items to

Chaos Orbs, and then exchange to Exalted Orbs.