Eldritch Incubator is an incubator. Incubator is a new item class introduced in the legion league. They are PoE currency items which can be applied to a piece of equipment to guarantee an item drop of a specific type after the specified amount of monsters has been killed. Each equipment can incubate one item at a time.

How to use Eldritch Incubator?

Right click this item then left click an item to apply it. The Incubated item drops after killing a specific number of monsters. 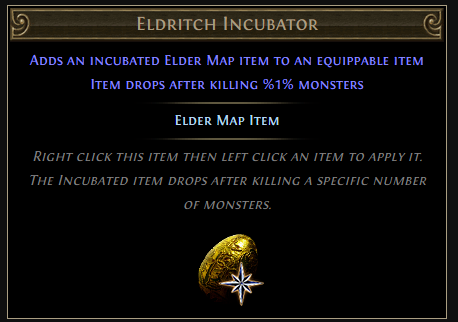 Adds an incubated Elder Map item to an equippable item

The Elder is a boss that is invading the Atlas of Worlds. He is the main antagonist of the War for the Atlas expansion. The Elder randomly spawns and fights the Shaper via influencing. The Elder will spawn on the player’s Atlas once at least 20 maps are influenced.

Note: Completing 20 maps while the Elder and its guardians are on the player’s Atlas without actually defeating any of them gives them a chance to disappear and remove the Elder-influence from the maps they were on.

Tier 17 Elder (also known as Uber Elder) can be fought by progressing through the Epilogue quests by collecting all 15 Memory Fragments then defeating Elder Guardians and the Shaper. Afterwards, when a Tier 15 map is Elder-influenced, it will cause all Tier 16 maps to become Shaper-influenced. Clear all four guardian maps, beginning with the map adjacent to the Elder influenced map and continue with one of the other two guardian maps, that are adjacent to the first map, and the Elder will occupy The Shaper’s Realm. Then as usual, you need to take out all 4 of the Elder’s Guardians to summon Uber Elder.

The Elder is assisted by the Shaper in this battle. The battle essentially pits the player against both bosses, with some divergences: