As the following example shown, sell a full rare set of Elder influenced items to a vendor in exchange for two Exalted Shards. 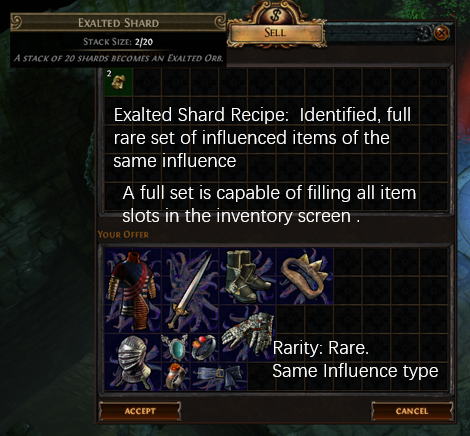 How to find influenced items?

Divine Orbs and Exalted Orbs actually have the same drop rate, but Exalted Orbs are worth so much more in trade value because there's no easy vendor recipe for them and because they're consumed when you craft certain meta-mods onto items.

Out of these two currency items, GGG would actually prefer the Divine Orb effect to be rarer, so that unique items with good rolls matter more, and so that players can exalt-craft their items more frequently.

This change will result in Exalted Orbs being far more available for crafting and Divine Orbs less available for rerolling mods on items.

Exalted Orb enchants a rare item with a new random modifier. Exalted Orbs are high-value poe orbs that play a crucial role in the in-game economy. Their primary purpose is to craft high-end rare items. Because of this, it is regarded as the “gold standard” currency for trading between players, with many trade deals listed in terms of Exalted Orbs. Since the average player does not have the means to craft high-end items, the average player typically trades Exalted Orbs for other valuable equipment instead of consuming them.

How to increase the drop rate of Exalted Orb?

Another way to get more value per hour is improving map crear time:

A lucky player can get more exalted orbs from trading than from killing monsters.

Some players level gems in weapon switch to sell on market. The rarest and the most valuable are awakened gems. But they are hard to find for most beginner players. Drop-only gems may be easier option to start with.

Players can boost their chances of getting powerful equipment and uniques with the statistics Increased Rarity of Items Found and Increased Quantity of Items Found. Rarity and quantity stats can come from player’s equipment, the support gems Item Rarity Support and Item Quantity Support, monster rarity, party bonuses, and map bonuses. The stats on the character stack additively with each other, and are subject to diminishing returns. Stats from the party bonus and monsters stack additively with each other, and are not subject to diminishing returns. The total player bonus stacks multiplicatively with the total party & monster bonus.

You can find Increased Item Quantity from your character(equipped items, gem skills, etc), some monsters, joined party bonuses. The easiest way is to search from PoE Trade:

Arcanist's Strongbox drops currency when opened. Some players prefer to craft it before opening, to increase item quantity.

A strong character guarantees your survival. In order to get more Exalted Orbs, you must win the fighting. PoE Ninja is a useful PoE Build website for building a powerful character. From them, you are able to build your character by learning professional players.

Farming currency in areas above your level, the currency drop chance is not increased. However, the currency items' drop rate will decrease if a monster level is two levels lower than your character level(After level 68, you will not get a penalty).

Cartographer's Chisel is a currency item that is used to improve the quality of a map. As the image is shown below, the 20% quality has added a 20% item quantity.

Map fragments can be used in a map device to open portals to various high level areas. Placing any one of the fragments along with a map into the map device will increase the item quantity of that map. It increases the currency items' drop rate by 5% to 10%.

Some items have the mods related to IIQ. You can see the following examples. For more items, just search in the PoE Trade: input "quantity" in the Mods box and choose "#% increased Quantity of Items found" mods.

How to use PoE Exalted Orb?

Exalted Orb enchants a rare item with a new random modifier. Right-click an Exalted Orb then left click a rare item to apply it. Rare items can have up to six random modifiers. The item's Catalyst quality increases the chance of applying a modifier which matches the quality type. Removes 20% Quality applied by Catalysts on use.

For powerful or wealthy players looking to use PoE Exalted Orbs on powerful rare items, there are two primary methods to consume them. The first is through direct use of the orb, adding a random affix to a rare item that does not already have six affixes. The other is to add high-end affixes through mastercrafting by paying a fixed amount of Exalted Orbs. The latter method grants crafters access to the special meta-crafting mods which cannot be rolled naturally.

A rare will not always have 6 properties, in those cases, an exalted orb adds one more. So if you have an INSANELY good rare that is already amazing with 4 or 5 properties, you can exalt it to make it even more godlike. But really, you're better off using it as currency to buy items that are already good, as it should only be used as crafting material if you are already in the elite tier in terms of gear and wealth.

PoE Currency Farming – How to get hundreds of Exalted Orbs

Since the drop rate or Exalted Orb is low, you have to kill more enemies to get it.

Looting Divination cards is one of the best way to farm Exalted Orbs.

This divination card can be exchanged for any random PoE currency. However, the most cases are the common currency items, such as

My favorite way is to sell valuable skill gems for Exalted Orbs. When building a character, one may need a level 21 skill gem with 23% quality. It is worth several Exalted Orbs. 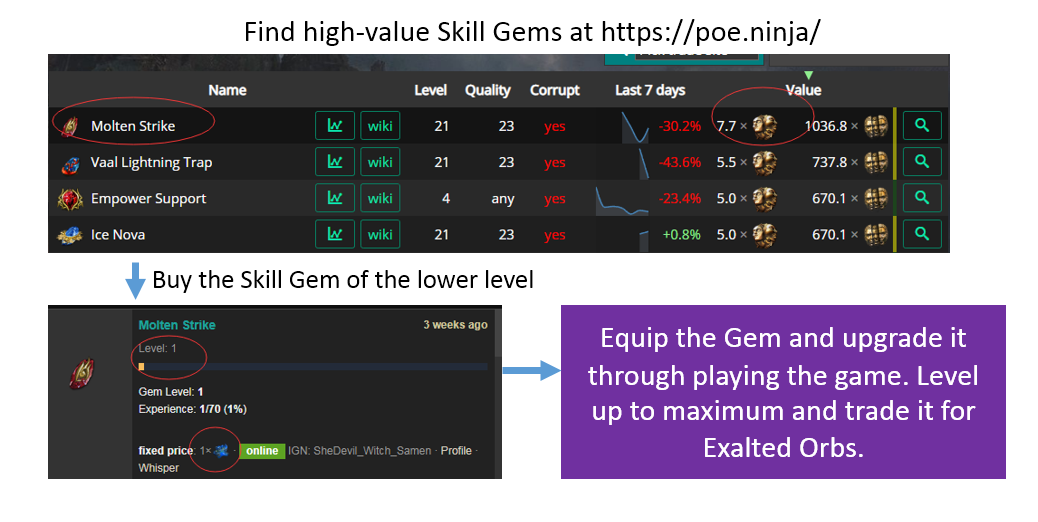 (1) Find a profitable Skill Gem at https://poe.ninja/challenge/skill-gems. For example,

Molten Strike of level 21 can sell 7 Exalted Orbs and

Ice Nova of the maximum level for 5 Exalted Orbs. This page has listed many valuable skill gems that can trade for Exalted Orbs.
(2) Buy the gem with a low level from https://poe.trade/. As you can see, a level 1

Gemcutter’s Prism to increase the Gem to Quality 20.
(4) Equip the Gem and upgrade it automatically while playing the game.
(5) When leveling up to maximum, use

Vaal Orb to corrupt it.
(6) Sell the gem for Exalted Orbs.

4. Buy Exalted Orbs from a seller

While farming Exalted Orbs takes lots of time, there are times when you wish to find a safe and legit site to buy exalted orbs. You can buy Exalted Orbs PC, PS4, Xbox One with the cheapest prices from below:

These recipes require a full set of rare items. A full set is capable of filling all item slots in the inventory screen (not including flasks, the alternate weapon set, or a quiver). Specifically, it consists of: 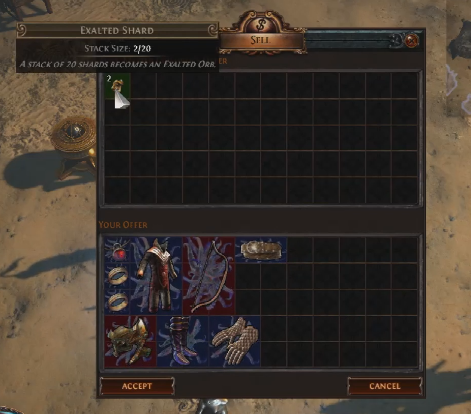 This is one of my Exalted Orb recipe list:

Meanwhile, these is a downgrade recipe for Exalted Orbs which is not worth to make.

You can trade PoE Currency with other players for it as well. The price of

Exalted Orb is equal to 150

Orbs of Alchemy. The follwing is the price list in Path of Exile.

Chaos Orb is about 1:150. The price is different every day in vary league.

Exalted Orb is regarded as the “gold standard” currency for trading between players.

Chaos Orb is regarded as the “silver standard” currency.