Right click this item then left click a rare item with The Searing Exarch or The Eater of Worlds dominance to apply it.

If both mods are of the same tier, neither are dominant.

In this example, The Eater of Worlds is dominant, it rerolls suffix modifiers. 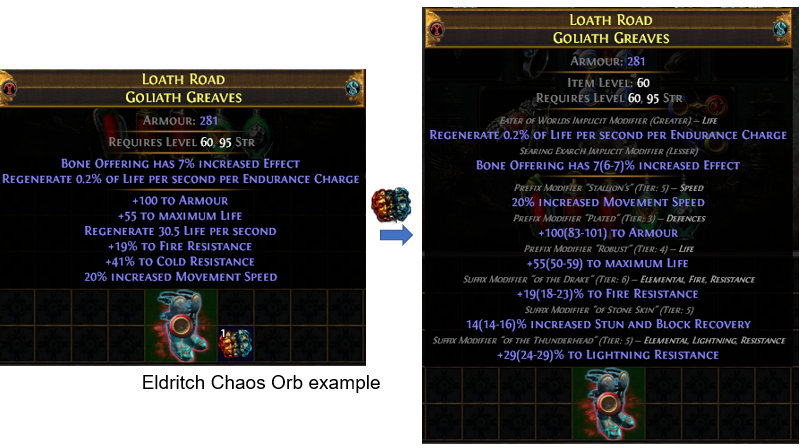 Eldritch Orb of Annulment, which add or remove a prefix or suffix depending on which Horror dominates the item.

These very rare currency items give you a large degree of control over your end-game rare item crafting, if you’re able to manipulate the Eldritch Implicits correctly.

It’s important to note that you can’t apply Eldritch Implicit mods to Influenced items. By that, I mean items that have the old type of Shaper, Elder or Conqueror influence.

Each mod has six tiers of power. The first four tiers come from the four versions of the Eldritch Ember and Ichor currency items, while the highest two tiers can only be upgraded to with

You can use an

Orb of Conflict to manipulate the tiers of these modifiers on your item, within the six tiers of modifiers available. When applied, the Orb randomly increases the tier of one modifier and lowers the tier of the other. The new

Eldritch Orb of Annulment can manipulate the prefixes or suffixes of an item depending on whether The Searing Exarch or The Eater of Worlds has a higher Eldritch modifier on it.

The best possible outcome is to have a Tier 6 and a Tier 4 mod at the same time. In order to achieve this, you’d want to apply the highest Eldritch Ember or Eldritch Ichor over and over until you have a Tier 4 modifier you want. Then use Orbs of Conflict to try to get it to Tier 6, before using more Ember and Ichor to lock in the Tier 4 mod of the other type that you’re looking for.

The Searing Exarch and The Eater of Worlds each have a powerful set of Eldritch Implicit Modifiers, which can be imbued onto items using Eldritch Embers and Eldritch Ichor, respectively. Although this process replaces existing implicit mods, it’s possible to have both types of Eldritch Implicits on an item at the same time.

Eldritch Implicits allows you to apply Eldritch mods to already good items that you have, so you have a lot more freedom to choose how you create your best items. You can also start interacting with Eldritch Implicits much earlier in your mapping experience.

While playing maps in Siege of the Atlas, you may find some new currency items: Eldritch Ember and Eldritch Ichor, corresponding to The Searing Exarch and The Eater of Worlds respectively.