PoE 3.15.2 added crafting bench recipes for adding a specific Enchantment to a Flask. There are recipes for all of the possible Enchantments obtained through Instilling Orbs. Players have the power to directly determine which modifier is applied to their flasks. This will cost five

Added a crafting bench recipe to remove Enchantments from an item. This recipe does not need to be unlocked and is always available. It costs three 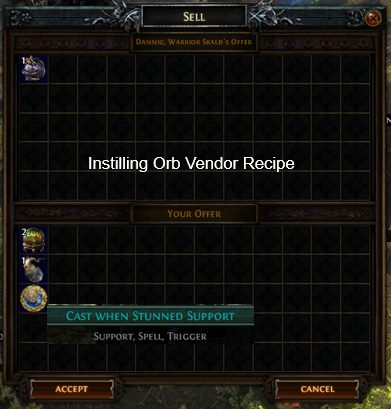 Quicksilver Flask is a Utility Flask. As the following example shown,

Instilling Orb enchants a new modifier: Used when you Hit a Rare or Unique Enemy, if not already in effect.

How to get Instilling Orb

How to search for Instilling Orb enchanted flask

Instilling orb wrong base type? This orb can only adds an enchantment to a utility flask. The following is a list of utility flask base types.