Chromatic Orb is a currency item that Reforges the colour of sockets on an item. The socket colors: red, blue, green, and white. It’s only possible to get red, blue or green sockets using this orb; for white sockets it’s necessary to use a

There are times when you want to change the colors of sockets, the following is the best way to get chromatic orbs poe.

This is the simplest and best way to obtain 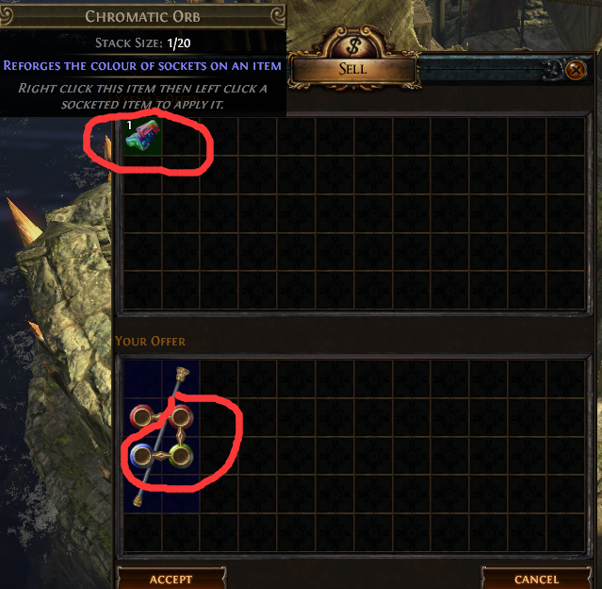 The drop rate of

Chromatic Orb is 5.508%. Like most currency items, it can be dropped by slain monsters, chests, and destructible containers. They also drop from Arcanist’s Strongboxes.

You can exchange PoE currency items for this item with other playes. The following is the price list.

Chromatic Orb price is equal to 1/4

Chromatic Orb is easy to make, while the

If one either wants to avoid randomness or wishes to obtain a specific color combination that is unlikely on a certain item (e.g. getting all red sockets on an item requiring high intelligence), one can instead use the Crafting Bench provided in your hideout. When obtaining socket colors that an item is already biased towards (e.g. obtaining red sockets on a chest piece requiring high Strength), using

Chromatic Orbs manually is less costly than using the Crafting Bench. On the other hand, for obtaining a socket color that an item is biased against (e.g. obtaining green sockets on a chest piece requiring high Strength), using

Chromatic Orbs manually is typically much more costly than using the Crafting Bench.

If you want to change the color of a white socket, you may use

Vaal Orb corrupts an item and modifying it unpredictably.