Portentous Delirium Orb is a stackable currency. It was introduced from PoE 3.10(Delirium League). The price of

The used percentage of Portentous Delirium Orb is 3.97%.

How to use Portentous Delirium Orb?

It modifies a Map item adding layers of Delirium with the Prophecy Items reward type. Right click this item then left click a Map item to apply it. Can apply up to 5 to a single Map item. Shift click to unstack. 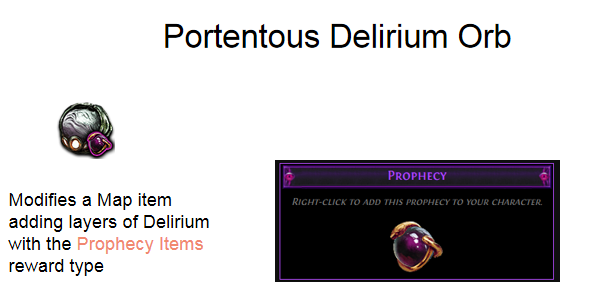 Prophecies are visions of a character’s future, provided by Navali. They can be purchased for one

Silver Coin and are stored in the prophecy screen. These prophecies influence the future of what happens to the player’s character. Some can change areas to generate different encounters or to force various outcomes to occur. Others trigger when a condition occurs and change the result.

For an additional cost of Silver Coins ranging from 1 to 9, Navali can seal prophecies, turning them into items so that they are tradeable. This allows players to delay their fate, or capitalize on it. Sealing prophecy chains will reset the quest state of that prophecy chain to 1. Conversely activating a sealed prophecy will set the quest state to the activated one, no matter where the state has been before.

Prophecies that do not trigger upon loading an area will not trigger ever for that area unless sealed and reused. This does not include maps.

There are currently 230 Prophecies that can spawn in the game.