Orb of Regret is a currency item that can be used to gain one passive skill refund point.

Listed below are all the quests that reward passive respec points.

How to use Orb of Regret?

Right click on this item to grant a passive skill refund point.

Refunding one Ascendancy skill point requires five regular refund points. When all points are refunded, use the Altar of Ascendancy in the Labyrinth treasure room in any difficulty to select a new Ascendancy class.

One can farm PoE currency yourself. Or, using U4GM coupon “Z123” to buy it directly.

Orb of Regret is 2 and the drop rate is 0.689%. One can get it by kill monsters, destroy chests and open strongboxes.

2. Purchase it from Vendor

Yeena lives in The Forest Encampment of Act 2, who sells 1

Orb of Regret in exchange for 2

Orbs of Scouring. Yeena also sells other currency, such as 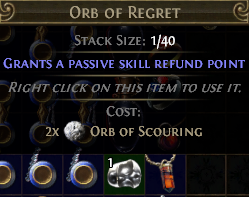 to Orb of Alchemy

You can use an

Orb of Regret exchange an

Orb of Alchemy from Clarissa, who lives in The Sarn Encampment of Act 3.

Any Book of Reform may be vendored to reclaim the 20 Orbs of Regret used to make it. However, the amulet will be lost.

Orb of Regret equals to either 4

When a character levels up or completes certain quests, he or she gains one skill point. A skill point allows the player to allocate a node on the skill tree, provided that it is already connected to an allocated node.

Players that choose the Scion as their character may also gain up to 5 additional passive skill points, depending on the choices they make in their Ascendancy.

Several quests in the storyline reward characters with points to spend on the passive tree. Players can use the command /passives in-game to get a list of passives quests they have already received on that character.

Listed below are all the quests that reward passive tree points.