Players build gardens in the Sacred Grove. Plant seeds that grow into dangerous enemies and craft their Lifeforce onto your items. High tier seeds can produce more valuable crafting modifiers.

Plant Potent Seeds. Seek out the Seed Cache in every area you explore. Take its seeds through Oshabi’s portal to the Sacred Grove. Sow those seeds to grow dangerous and rewarding monsters. While most seeds grow easily, rarer high-tier ones require more careful planning but yield more valuable results. Harvest Seeds:

Extract the Lifeforce. When your monsters are ready for harvest, slaughter them and claim their Lifeforce. Every enemy you fight in the Sacred Grove is one you intentionally planted. Customise your combat around your character’s capabilities and what rewards you’re seeking.

Reap a Bountiful Harvest. Every monster you defeat in the Grove grants you a crafting option. Performing one of these powerful crafts consumes Lifeforce from the monsters you just harvested. In order to maximise your Lifeforce and hence crafting potential, you’ll want to take on as many monsters as you dare handle. Harvest Crafting provides powerful directed crafting to an extent that Path of Exile has never seen before.

Evolve your Garden. As you build the ultimate garden, you’ll discover exotic seeds with specific needs that must be met in order to grow. Various pipes, condensers and dispersers can help you fertilise your garden with any remaining Lifeforce.

PoE 3.11 has added four new Warcry skills and reworked three existing ones. Warcries now scale based on the power of nearby enemies rather than the quantity. Many Warcries also exert your attacks, increasing their power for a number of attacks.

In addition, GGG adds a new support gem that speeds up your Warcries in exchange for a slightly longer cooldown.

Add Call to Arms keystone to the Passive Skill Tree that makes Warcries instant but causes them to share a cooldown (by default Warcries no longer share cooldowns in order to promote builds using multiple Warcries).

Harvest league has introduced three new Brands, one Brand support gem, and has revamped existing Brands. GGG has made Brands a lot more versatile while also reviewing how their core mechanics work.

Brand Recall no longer reigns supreme but is a useful tool alongside many new options.

Harvest released a new Vulkan renderer which has greatly reduced stuttering and smoothed out game performance. This renderer has made a massive improvement for many players, and aim to fix issues that other players have encountered in Path of Exile. This new renderer comes alongside continued graphics technology improvements such as a new Bloom system that is used extensively in the Harvest league.

You must change the Vulkan Renderer options in the login screen that is not in the game. Otherwise, the option is grayed out.
Click “O” to display the Options. Then click the Graphics menu and set the value of Renderer. 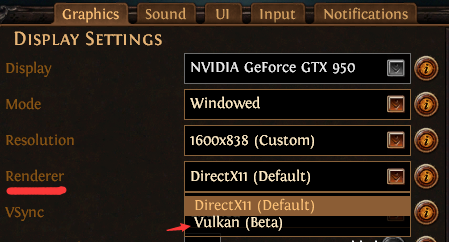 The Passive Skill Tree has received many improvements including better support for some mechanics (for example, Two-handed Weapons or Rage) with both numeric buffs and entirely new clusters of passives. In addition, there are many new notable and keystones passives, which include both fan-favourites from Timeless Jewels and even some entirely new ones.

We’ve taken the opportunity with this patch to review the passive skill tree as a whole, with a few specific goals in mind:

We've reviewed all Two-Handed weapon basetypes and have adjusted their attack damage, speed and implicits, with the goal of giving Two-Handed weapon builds a different feel to their dual-wield and one-handed counterparts, and to ensure that the damage you gain by using a Two-Hander made up for the lack of block and slower attack speed. All Two-Handed weapons have had their base damage increased by at least 15%, with axes in particular gaining even more damage.

Zana's map device options are now unlocked as you complete bonus objectives on your Atlas. These are the League Mods available during 3.11.0.