Rallying Cry can have an indefinite number of hidden stacks active, of which each loses its Duration naturally, but only the strongest one is shown as active buff, getting replaced by the second strongest when running out.

Rallying Cry – No longer regens mana, now gives a damage bonus based on your -weapons damage- (similar wording to

Rallying Cry has been reworked and given a new identity. It has traditionally worked well with support-style builds and we designed it to provide a new way to support allies.

This is a rework to an existing skill to give it a new identity. This obviously seemed to fit a very supportive-type of role, but we wanted to do a new way to support allies.

It works well with minions or to support a full party of allies.

Rallying Cry is one of the reworked Warcry Skills. It was previously used to increase mana regeneration for you and your allies as well as your damage against enemies. It will now no longer regenerate mana but now grants a percentage of your weapon damage to each of your allies based on the power of nearby enemies.

It also causes your next few attacks to become exerted, granting a bonus to your damage based on the number of your nearby allies.

Rallying Cry alongside the

Herald of Purity skill which summons sentinels when you kill an enemy. These sentinels can take advantage of the benefits of your Warcry and wield empowered attacks! 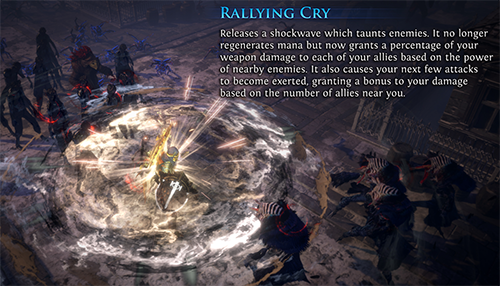 Rallying Cry is an

For Duelist players, after completing Lost in Love(Act 3) quest, this gem is given as a quest reward.