Tectonic Slam is slam skill that slams the ground in front of the player, dealing area of effect damage in a cone. Each attack has a chance to consume an endurance charge to deal more damage and gain a larger AoE.

Slam the ground, unleashing a fiery fissure in front of you, dealing area damage and releasing a random number of smaller fissures branching off from it. Can consume an Endurance Charge to perform a Charged Slam, covering a greater area with more branching fissures. Requires a Mace, Sceptre, Sword, Axe, Staff, or Unarmed.

Enchantments that previously granted a chance for a Charged Slam now grant an additional chance for cracks. 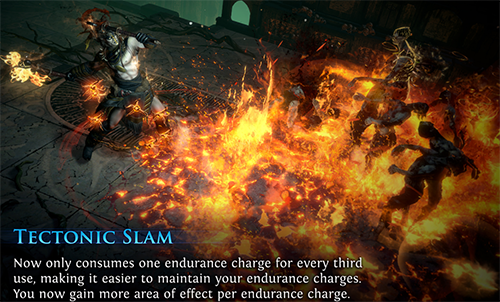 This classic Path of Exile skill has been reworked and received impressive new visual effects.

Historically, it was difficult to reliably maintain the Endurance Charges that enhance this skill, making it difficult to use as a primary source of damage. It still requires you to invest in endurance charges but now only removes a charge every three uses, making the charges easier to maintain.

These changes make it a much more effective melee skill and encourage investment into Area of Effect and Endurance Charge generation.

Fist of War Support: Every few seconds an ancestor appears above your character and performs your slam in unison with you, creating a supercharged slam dealing much more damage with an increased Area of Effect.

Multistrike Support with this skill tries to consume an endurance charge on each of the three strikes for a total of three charges consumed per activation of the skill.

Tectonic Slam is an

Orb of Chance. This gem can be bought at the listed NPC vendors, after completing the following quests:

For Marauder, Scion players, after completing Sever the Right Hand(Act 3) quest, this gem is given as a quest reward.

Tectonic Slam is 28. You can get it by killing enemies, opening Gemcutter’s Strongbox.

The following helmet enchantments are related to Tectonic Slam.