Ancestral Warchief. The following slam skills can be used with the Fist of War support:

Following is a video of the Fist Of War in action:

Fist Of War Support gem causes an ancestor to appear above your head and to use, in unison with you, whatever slam skill you have slotted every few seconds on cooldown. It essentially supercharges your slam attack.

It’s relevant for the two-hand versus one-hand argument. If you’re using this gem with a one-handed weapon, the ancestor is going to be using a very small attack every few seconds versus doing a big attack every few seconds alongside your slam. If you can get into unison with him, the slower the better because it is making better use of the time. Both you and the ancestors will be doing more damage. 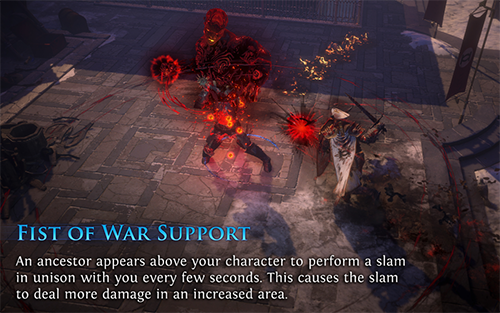 Belly of the Beast Full Wyrmscale

The price of Fist of War is an

Orb of Alchemy. This gem can be bought at the listed NPC vendors, after completing the following quests:

For Duelist, Marauder, Templar players, after completing The Eternal Nightmare(Act 4) quest, this gem is given as a quest reward.