Doryani’s Touch is a lightning attack. The character uses their fist to slam the ground in front of them, with less attack speed, but more damage. This attack deals Lightning Damage to enemies in a large area, with a chance to Shock them. Cannot be used while wielding a Weapon. Cannot be Evaded.

Doryani’s Touch can be supported by applicable support gems socketed in the above items; it is not necessary to link the sockets together.

Doryani’s Touch is not a skill gem, therefore it cannot be supported by

Both the main circle of the skill and the smaller circles 90 degrees apart on its edge apply the full damage of the skill, and scale their radius accordingly. Sufficient investment in Area of Effect increases will allow the smaller circles (and the bottom of the main area) to reach enemies offscreen. The direction that the player character is facing has no effect on the placement of these circles, as their rotational position is random.

All effects on Slam skills (e.g.

Fist of War Support, exertion from

Though it can be blocked or dodged as with any attack,

Doryani’s Fist ignores all accuracy and evasion. This also prevents the player from evading reflected damage from this attack.

Damage from secondary sources like ‘added damage’ supports, auras, or heralds applies at 600% of their listed value.

Since Doryani’s Touch requires unarmed attacks the skill’s base crit chance is 0%. This value can be modified by sources of base crit such as

Increased Critical Strikes Support, or Assassin’s Deadly Infusion. Meanwhile, due to the innate “Can’t be evaded” modifier, allocating Resolute Technique is generally pointless for the purposes of this skill. 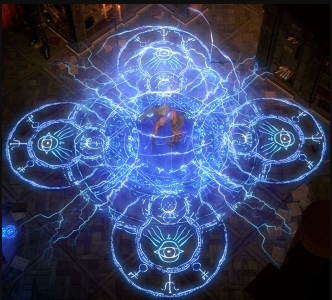