Last week, PoE released a beta version of the new Vulkan renderer, which greatly reduces the phenomenon of jamming and makes game performance smoother. The renderer has brought great progress to many players, and GGG’s goal is to fix problems encountered by other players before the Harvest(PoE 3.11) was released. This new renderer is accompanied by the continuous improvement of graphics technology, such as the new Bloom system widely used in the Harvest league.

In patch 3.10.2, the new Vulkan renderer is now in beta on the live server, and you can choose it in the game instead of DirectX 11. When the screen freezes and FPS drops the line, Vulkan renderer reduces the flat line. In essence, you can have many more stable game experiences. Compared with the previous “open a legion and wait 5 seconds until your PC unfreezes”, you can actually play the game now.

The team’s goal is to make the Path of Exile‘s graphics and performance more stable. This is also to solve the problem of the game’s DirectX 11 renderer getting stuck because the graphics driver uploads the shader to the GPU. In addition, graphics technology has also been improved, such as the new Bloom system, which is widely used in the Harvest league, and the highly detailed visual effects and monster designs that are handled by the Path of Exile 2 team.

How to set Vulkan Renderer

You must change the Vulkan Renderer options in the login screen that is not in the game. Otherwise, the option is grayed out.

Click “O” to display the Options. Then click the Graphics menu and set the value of Renderer. 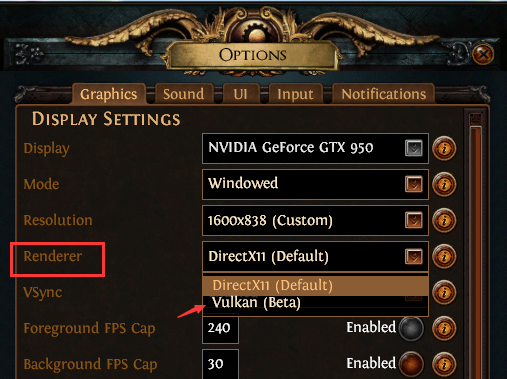 If you get into a state where the game won’t launch with the Vulkan renderer, then you can edit the production_Config.ini file (usually found in Documents\My Games\Path of Exile) and change renderer_type=Vulkan to renderer_type=DirectX11

The Vulkan renderer won’t magically make your graphics card perform better than before, but it will make performance more consistent. This means that your peak frame rate will not increase, but you will not have so many unpredictable peaks. Basically, this new renderer gives GGG complete control over how resources are managed, so GGG can adjust it to the exact requirements of the Path of Exile.

Currently, on many systems, this renderer is actually slower than DirectX 11. In the next few weeks, GGG can easily improve this (and target version 3.11). Basically, Vulkan provides you with a better framework for optimization, and GGG is just beginning to explore this. You may find that even at a slightly slower frame rate, significant differences in frame rate stability are worth using. But at present, the main goal is stability testing, and GGG is committed to getting the frame rate as fast as possible through optimization.

In addition, Vulkan renderer forces texture details to “medium” on systems with less than 3gb of graphics memory. This means that PoE can avoid any form of stuttering/spikes because the texture has to move between the GPU and the system RAM. This kind of thing is something that GGG tries. Find a solution that looks as good as possible during execution. The idea that uses the Vulkan renderer is frame rate consistency, so players can enjoy the game at any time without any stuttering/spikes. The performance will still be proportional to what is displayed on the screen, and of course, a better graphics card will always help.