Starting levels for the new skill gems in Heist

Harvest will not become a core Path of Exile mechanic. Any progress from the 3.11 version of Harvest will definitely not be compatible with future plans for the league. When the Harvest league ends next week, all Harvest data (groves, seeds, infrastructure, unused crafts, etc) will be removed. Consider using any saved up crafts beforehand!

The ultimate goal is execute a Grand Heist which will offer exclusive new rewards such as Weapon and Body Armour Enchantments, Experimented Base Types, Heist Trinkets, Alternate Quality Gems and Replica Unique Items.

Call of Steel causes all impaled enemies in a large radius to release all of their spikes at once, dealing area damage as the shards burst out of them.

Lancing Steel consumes Steel Shards by thrusting an Axe or Sword forward and create a group of impaling projectiles in the air which shoot projectiles forward one after another.

Splitting Steel consumes a Steel Shard to fire a single impaling projectile that splits on impact and creates an explosion of damage.

Shattering Steel swings an Axe or Sword, releasing projectiles in sequence. The projectiles shatter when colliding with an enemy or travelling a short distance.

Void Sphere creates an object that generates a pulse within a large radius. This pulse deals physical and chaos damage and pulls normal, magic and rare enemies toward its centre.

Frost Shield creates an icy dome on the ground at your location that protects the caster and their allies from enemies.

Sigil of Power creates a potent circle on the ground that grants additional lightning damage to you and allies standing within it, while also slightly increasing the cost of your skills.

Flame Wall creates an area of burning flame. Any enemies that pass through it will be inflicted with a secondary burning effect.

Lowering the base maximum Intensity from 4 to 3, while increasing all bonuses to compensate.

Pinpoint Support gives 3 additional projectiles, while each stack of Intensity will reduce the number of projectiles you fire by 1 while greatly increasing the skill’s damage.

Curses are now divided into Hexes and Marks. Hex Spells apply curse debuffs to each enemy in an area, while Marks apply the curse debuff on a single target and cannot be applied to more than one target.

Hexes are Flammability, Hexblast, Frostbite, Conductivity, Elemental Weakness, Vulnerability, Despair, Temporal Chains, Enfeeble and Punishment. Impending Doom is a support gem that can support hexes. The more Doom the supported hex built up before its expiration, the greater damage the explosion will deal.

In order to execute a Heist, you need a Contract. The Artifact you're seeking will be shown on the contract. Like maps, Contracts can be crafted to increase their difficulty and reward. 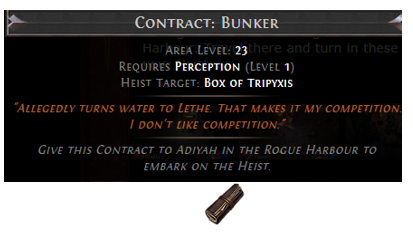 Blueprints are needed to run Grand Heists. Blueprints show where the vaults are located inside sprawling facilities.

Intel is something that's gained automatically when you turn in Artifacts you've retrieved from Heists and is essential in the planning of Grand Heists.

All the items in Heist are considered as Contraband items. When you reach the maximum Alert Level, you'll trigger the alarm. You'll have a brief window to steal as much as you can before the facility goes into lockdown and you're swarmed by guards. If you fail at a Heist, you will lose all your Contraband items.

PoE Heist added 28 new Unique items, including one designed by a supporter.

Replica Unique items result from attempts to re-create unique items of legend, where the end product has a few crucial differences. They're often appropriate for entirely different character builds than the original item.

Artifacts are the main objective from a (non-Grand) Heist. The Artifact you’re seeking will be shown on the contract before the Heist commences.

Experimented Base Types are a variety of new item base types that have exotic properties that differ from their core-game counterparts. 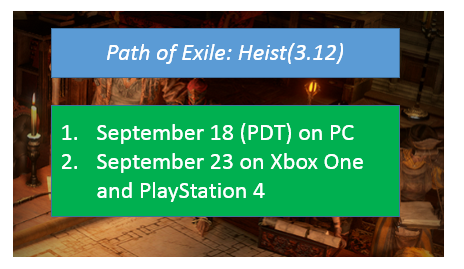 All changes to Cluster Jewels affect existing items and characters.

GGG is releasing Path of Exile 3.12 for macOS alongside the Heist expansion! This version of the Path of Exile is fully integrated into the main worldwide PC realm so you can access your existing accounts and microtransactions.

Normally Path of Exile operates on a 13-week development cycle, launching one expansion per season. These expansions always occur in March, June, September, and December.

It took 14 weeks to develop Harvest(3.11) due to the limitations of working from home. This meant GGG would need one of their expansions to be developed in just 12 weeks to make up for that lost time.

Their intention was to develop 3.12 expansion on this 12-week timeline but due to the ambitious scope of the league, GGG feels it is a lot safer to consume the 13th week. So while this isn't technically a deviation from their normal timeline, it's slightly later than GGG originally indicated.

GGG plans to start the development of 3.13 before 3.12 is finished so that they can comfortably meet their Christmas deadline for that one.

It’s important to understand that due to its scope, 4.0.0 is likely at least a year away from full release.