PoE 3.12 adds a new Curse-related skill and a new Curse support gem. The new Doom mechanic causes a self-cast Curse to increase in intensity over time until it expires. This works well in conjunction with the Impending Doom support, which causes an explosion of chaos damage when a linked curse ends. Curses have also received a new look.

If the Hex was self-cast, the curse will gain Doom over time. Doom increases the effectiveness of the curse (1% per Doom). Maximum Doom is capped at 30 by default. Each Hex has its own Doom counter.

Impending Doom is a support gem that can support hexes:

Hex Spells apply curse debuffs to each enemy in an area, while Marks apply the curse debuff on a single target and cannot be applied to more than one target.

The new Doom mechanic causes a self-cast Curse to increase in intensity over time until it expires. This works well in conjunction with the Impending Doom Support, which causes an explosion of chaos damage when a linked curse ends.

Doomsday is a keystone passive skill that modifies Hex spells. When casting the Hex spell, instead of applying the curse which gains Doom over time, the spell creates a Hexed Area for 1 second. Enemies in the Hexed Area receive the curse, and after 1 second, the Hexed Area expires and applies the maximum amount of Doom to enemies standing in it.

Whispers of Doom is a notable passive skill that raises the active curse limit by one.

Impending Doom support gem triggers Doom Blast when the Supported Hex on an enemy expires, causing an explosion of Chaos damage based on the level of Doom that has accumulated while the Hex was active. 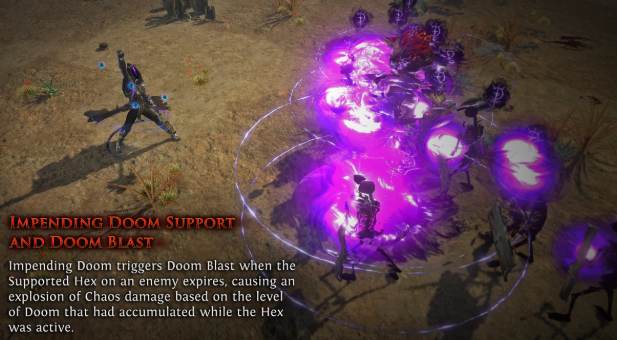 Curse skills were often used via automatic triggers or application. With Path of Exile: Heist‘s rework to curses, the idea is to encourage players to self-cast them more often as they’ll grow in intensity over time after being cast. There will also be new and reworked gems that interact differently with curses.

One example is Impending Doom, a support gem that makes cursed enemies explode once the curse’s effect ends. This will only work on self-cast curses whether it’s from the end of the duration of the spell or because the player removes the curse prematurely (or applies a different curse).

Does Impending Doom work with Curses cast by Bane?

It currently doesn't but that's not 100% locked in.