Sigil of Power - Path of Exile

Sigil of Power creates a potent circle on the ground that grants additional lightning damage to you and allies standing within it, while also slightly increasing the cost of your skills. As you spend mana, the skill powers up in stages. Each stage grants more additional lightning damage. Once it’s fully powered up, it also causes enemies standing within the circle to deal less damage. 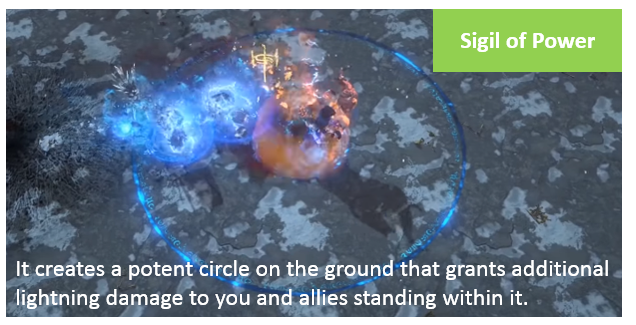 This skill offers a way to empower your abilities while facing a difficult boss, providing additional damage when you need it. Its defensive properties can be really beneficial when you’re able to keep the boss within the Sigil or against bosses that remain in one place.

Like the other spells mentioned above, this ability has a long cooldown and can take advantage of Second Wind if you’d like to. Increasing its area and duration also works well to extend the reach and lifetime of your powered Sigils. It works well alongside skills with the Archmage support to increase their mana cost, but other spellcast builds usually spend enough mana to fully charge up the Sigil.

Sigil of Power is a spell which places a sigil in an area around the caster for a duration. The sigil grants added lightning damage to friendly units. Spending mana while within the sigil empowers it, increasing the buff effect and when full powered, causes enemies within the sigil to deal less damage.

Each skill usage within the area can only increase the number of stages by one, regardless of Mana spent.

Sigil of Power can advance to stage 2 immediately, as being placed at stage 1 doesn't count as "gaining" a stage. Advancing to stage 3 or higher takes a minimum of one second after the previous stage was gained.

Arcane: Sigil of Power cannot be supported by Archmage Support.

Sigil of Power can be created from the following recipes:

This item is given as a quest reward for the following quests:

This item can be bought at the listed NPC vendors, after completing the following quests:

Sigil of Power has the following alternate skill effects: