PoE 3.12 introduces six new spells. A goal with these new spells is that while they are powerful in a variety of character builds, they have additional benefits when self-cast.

How to get Void Sphere?

It is now offered to the Witch, Templar, Shadow and Scion for completing Breaking the Seal quest(Act 4). 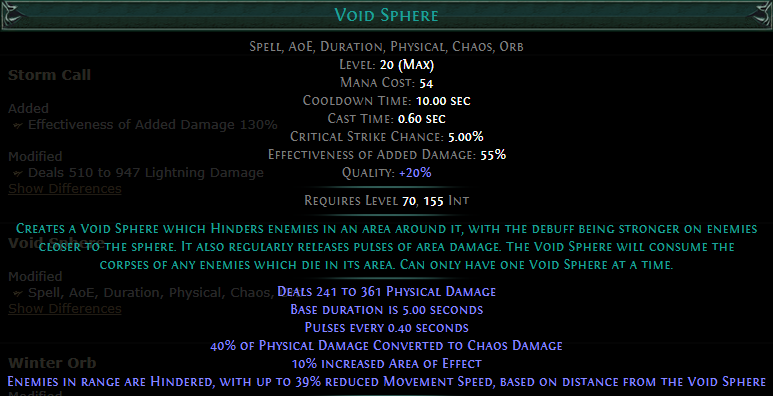 Void Sphere creates an object that generates a pulse within a large radius. This pulse deals physical and chaos damage and pulls normal, magic and rare enemies toward its centre. The first few pulses generated by Void Sphere have a much greater gravitational pull than subsequent pulses. All enemies in its area of influence will also be hindered. The effect of this debuff increases the closer enemies are to the centre of the sphere. Enemies that die within the area affected by the Void Sphere will have their corpses sucked into the void.

Void Sphere can be useful for controlling dangerous enemies, grouping a cluster of slower enemies together to inflict a concentrated damage burst and for triggering on-hit effects over a long period. The skill has a long cooldown, so it can take full advantage of the Second Wind Support to enable you to use Void Sphere twice in relatively quick succession. Note that only one Void Sphere can be active at a time. 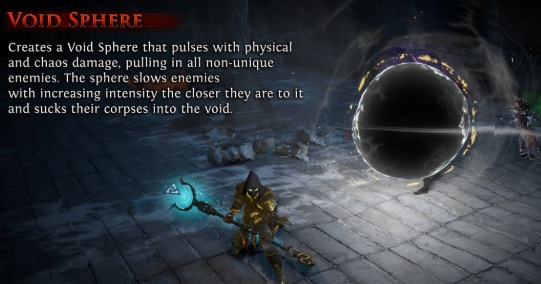 As for Void Sphere, it looks absolutely cool. The spell creates a black hole that pulls enemies, which is pretty good for crowd-control. Enemies that die near the vortex are sucked into it for some nifty visual effects. Oh, and before you ask, no, it does not affect unique bosses.

Void Sphere creates a Void Sphere that pulses with physical and chaos damage, pulling in all non-unique enemies. The sphere slows enemies with increasing intensity the closer they are to it and sucks their corpses into the void.