• The story of the new season takes place in the endless Sea of Void, and the biggest challenge we will face this season will be the Lord of the Void Sea, the king of pirates, who leads the fleet to plunder the realm, and the countless crew members that he enslaves.

• Defeat the enemies to collect Void Sea Night Flame and put it in the Void Sea Seal to start the challenge. Beat the challenge to receive a Seal Wisper. Break 6 seals and then beat the Bride of Void Sea at the Void Sea Terminal to open the bride's treasure. You could also receive Void Sea Invitations when you defeat the Bride of Void Sea. Collect a certain amount of Void Sea Invitations to challenge the ultimate boss of the season—the Lord of the Void Sea. The Lord of the Void Sea will drop amazing Legendary items, including Legendary Hero Relics that can significantly enhance the corresponding Hero Traits and combat style. More treasure is waiting for you to find out!

Lord of the Void Sea is the final boss of Torchlight Infinite Season 2(Blacksail).

The start of the new season sounds the horn of a new hunt! While holding back swarms of advancing pirates, Hunters will continue to move forward in the Void Sea map, defeat the [Season Boss – Lord of the Void Sea], and complete the first kill of the new S2! 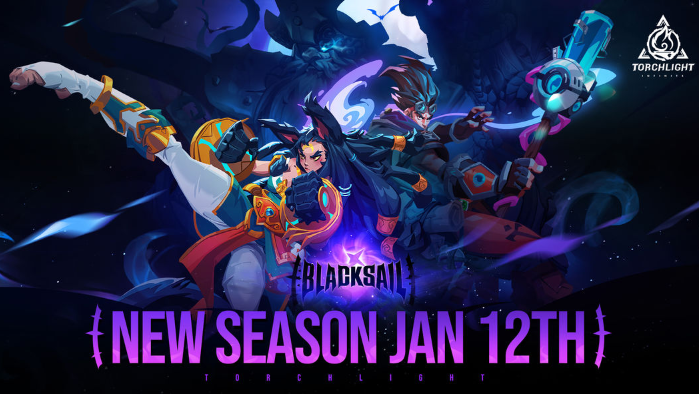 Defeat the Lord of the Void Sea at the lowest difficulty level to complete the season first kill and enter the rankings. Of course, brave Hunters are very welcome to directly challenge a higher difficulty level 🙂

—Note: The difficulty level of the Lord of the Void Sea differs according to the number of Void Sea Invitations the Hunter places in the Void Sea Seal.

The rankings of all Hero Traits on each server will be calculated separately in this event. This means Hunters who prefer different Hero Traits and are from different servers can now compete with Hunters who share the same preference as themselves!

For more information about this event:

Q: How do I sign up for the First Kill Contest?

A: During the event, characters created in the season server will participate in this race event by default after logging in.

Q: What are the rewards of this event?

“A: The top 10 Hunters of each hero trait from each server will get 500 Primocryst and an exclusive title in the official Discord channel. Hunters who complete the event goal during the event but fail to enter the top 10 will get 100 Primocryst.

*How to claim the title: players who enter the top 10 ranking for each hero trait can claim the title by going to the official Torchlight: Infinite Discord channel after the event and private message GG-Lawren with the corresponding game account ID.”

Q: What are the distribution rules for the rewards of this event?

Q: When will the rewards of this event be issued?

A: All rewards will be issued at the same time after the event ends and players’ rankings are finalized.

Q: How will the fairness of this event be guaranteed?

A: We will check the data of all players who receive a ranking. If the player’s data indicates that the player has any abnormal game behavior (including but not limited to the use of plugins or scripts, RMT, or exploitation of malignant bugs), we will disqualify the player and impose appropriate penalties. The official Torchlight: Infinite team reserves the right of final interpretation.