They may not be as flashy as a powerful weapon or armour item, but flasks in Path of Exile will literally mean the difference between life and death. 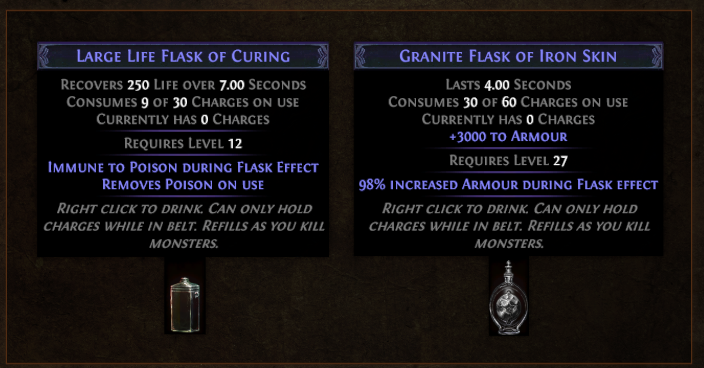 Carefully consider your flask modifiers. They can make all the difference.

Flasks in Path of Exile are not consumable items. Unlike Scrolls of Wisdom, when you use a Flask, it does not vanish. Instead, it simply consumes a number of flask charges based on the flask you're using, and, once empty, must be refilled before it can be used again. Flasks can come in normal, magic or unique rarity, but not rare.

Usually, flasks refill as you slay monsters. This means as long as you're successfully engaging in combat, you should always have a flask or two available for use. But if you get into a spot of trouble and empty your flasks, you'll either have to carefully slay enough monsters to refill them or return to Town.

Your flasks also refill when you return to Town, so jumping into a portal is a valid strategy when you're running low on flask charges. Some flasks, such as those with the 'Surgeon's' prefix, can be refilled based on other conditions. 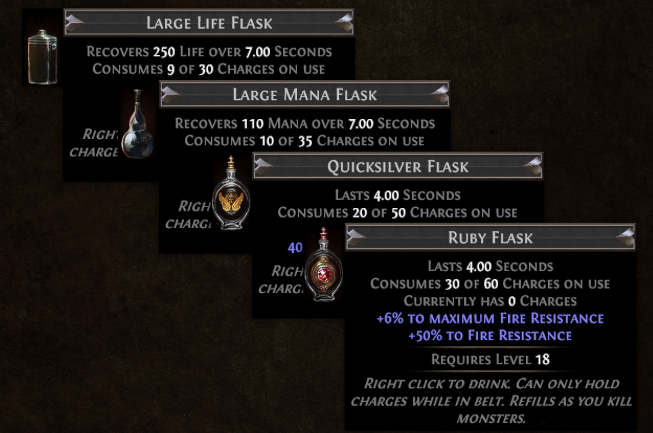 It's helpful to have a mix of different flasks for different situations.

Other magic mods can enhance the amount of life or mana a flask restores, or the duration it lasts, or the number of times it can be used. Some also provide extra utilities, such as removing curses or ailments.

Carefully selecting your flasks and which mods they have is just as important as selecting which weapon to wield or passive skills to take. If ever you are struggling to survive, take a look at your flasks and see if improvements can be made. They are often a cheap and effective place to start solving character build problems.

Flasks are friends! Don't be afraid to use them often.

Macros are only allowed if they perform one action per key press. This is why macros for logging out, /oos, /remaining, and /itemlevel are ok; those are each only one action being sent to the server. Any macros that perform multiple actions on the client is against GGG Terms of Use.

Making a macro to drink three flasks is sending three different commands with one key press, so they are not allowed.

Can I use a macro that activates all of my flasks at once?

No. The most commonly cited rule pertaining to macros is “one action per key press.”

Using a flask is considered an action – and using multiple flasks is thus viewed as performing multiple actions. To press a single button resulting in multiple actions being taken would be regarded as partially automated gameplay. That is absolutely not allowed.