Timeless Karui Emblem PoE Price, Map, Splinter, How to Use in Legion

How to Use Emblem in PoE Legion?

Timeless Karui Emblem is a map fragment obtained by combining 100 Timeless Karui Splinters. It can be used in the Templar Laboratory or a personal Map Device.

It is a Legion League unique map area and can be only accessed by using Emblems in a map device. To open the area, you must use at least two different emblems with no duplicates.

Queen Hyrri Ngamaku is a boss. She is the general of the Karui legion.

Hyrri was the niece of King Kaom of the Karui. During the Purity Rebellion, Kaom realizes his forces would be no match for General Lioneye and his Gemling Legion, especially when the Karui tradition forbade men from fighting with projectiles of any kind. However, he realized the tradition didn’t apply to women, and at his behest sends Hyrri to Thebrus to be trained archery by Voll’s finest tutors. During Kaom’s siege on Lioneye’s Watch, Kaom fakes a retreat to draw Lioneye’s forces out of their fortifications for Hyrri and her band of female archers to ambush Lioneye, creating a decisive victory for Kaom. Hyrri’s victory would mark a historical moment for Karui women, at the cost of losing respect for breaking tradition.

Following Kaom’s corruption by Nightmare, Hyrri guided the remaining five hundred Karui families back to their home of Ngamakanui.

Orbs of Alteration, or 2

Timeless Karui Splinter is a currency item. Combine 100 Splinters to create a 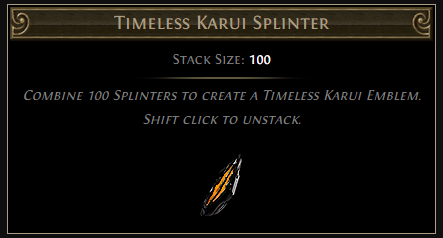