It performs a warcry, taunting all nearby enemies to attack the user and exerting subsequent strike attacks. Grants a buff which gives you bonus armour and melee range.

This is a new Warcry which was designed to work well specifically with strike skills. It causes your next few strikes to also target nearby enemies, similar to the Ancestral Call support.

It also provides a buff based on the power of nearby enemies which both increases your melee range as well as providing bonus armour.

It’s intended to be a well-rounded Warcry that generally provides benefit to anybody interested in playing strike skills.

It performs a warcry, taunting all nearby enemies to attack the user and granting endurance charges. Gives a brief burst of life regeneration, as well as a buff which grants resistances and physical damage reduction based on your endurance charges.

Enduring Cry received a relatively minimal rework but we wanted to see if we could improve various aspects of this skill while we were reworking the others.

It still generates endurance charges based on the power of nearby enemies, but also provides a short burst of very powerful healing. It also temporarily gives you additional resistance and physical damage reduction for a short duration.

Enduring Cry does not exert your next few attacks; its benefits are purely defensive.

It performs a warcry, taunting nearby enemies to attack the user, and summoning Mirage Warriors from nearby corpses. The Mirage Warriors each use a linked attack skill once before dissipating.

This is an intense new Warcry that has been designed to be very open-ended in how it can be used. It’s a Skill/Support hybrid which melee attack skills can be linked to. This Warcry summons ghostly mirage warriors from corpses near you. These ghosts use one of the linked skills once before dissipating.

General’s Cry lets you summon your own legion of warriors to destroy your enemies using a large selection of skills.

It deals attack damage in an area.

This was previously known as

Abyssal Cry and has received a full rework. We aimed to keep its old features while providing some new exciting ones to refresh its appeal.

It covers enemies in ash, a debuff that scales with the power of nearby enemies. It also causes enemies that are affected by this debuff to explode with fire damage when they are slain.

It also exerts your next few attacks to trigger Combust when hitting an enemy. Combust is a triggered Area of Effect attack skill granted by the

Infernal Cry gem. It scales with attack damage modifiers and can benefit from your supports.

It performs a warcry, taunting nearby enemies to attack the user and exerting subsequent attacks. Grants a buff which lowers the effect of enemy physical damage reduction against your hits.

Intimidating Cry was only obtainable through a unique item. In addition to it now being available as a skill gem, it has undergone a full rework to be a lot more punchy and exciting.

Its benefits are purely offensive. It achieves this by intimidating nearby enemies and exerting your next few attacks to deal double damage. It also provides a buff that lets you ignore some of your enemies’ physical damage reduction based on nearby enemy power. (Note: we’ll reveal what number of exerted attacks each Warcry creates closer to launch)

It’s intended to be the offensive counterpart to

Enduring Cry. It should work in a wide variety of builds to make your next few attacks feel really powerful.

It performs a warcry, taunting nearby enemies to attack the user and exerting subsequent attacks. Gives nearby Allies a buff based on the damage of your weapon.

Rallying Cry has been reworked and given a new identity. It has traditionally worked well with support-style builds and we designed it to provide a new way to support allies.

This is a rework to an existing skill to give it a new identity. This obviously seemed to fit a very supportive-type of role, but we wanted to do a new way to support allies.

It works well with minions or to support a full party of allies.

It performs a warcry, taunting nearby enemies to attack the user and exerting subsequent slam attacks. Grants a buff which makes it easier for you to stun enemies.

GGG has created a new category of skills known as ‘slam skills’ and wanted to make a Warcry that synergises well with these skills. It causes your next few slam skills to have an increased area of effect and more damage which both increase with each attack until you reset the Warcry or your exerted attacks run out.

It knocks enemies back and interrupts them when it taunts them. It then grants you a buff based on nearby enemy power which reduces enemy stun threshold, making it easier to stun enemies with your hits.

Urgent Orders Support increases the speed of the supported warcry at the cost of additional cooldown time. 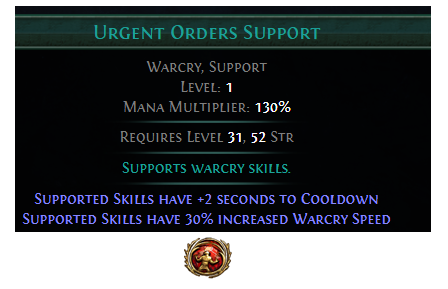