Broken Faith is a unique Archon Kite Shield. It was rebalanced in the Path of Exile: Harvest.

Broken Faith now has its original -10% block chance mod instead of +5% block chance. It now grants Unholy Might while you have no energy shield, instead of temporarily when you block. While holding it you now create Profane Ground instead of Consecrated Ground. This new ground effect reduces all enemy resistances as well as making them more likely to be critically hit, but does not provide the life regeneration that Consecrated Ground does.

The first version of

Broken Faith added to the game had below-average defensive stats for a shield in exchange for access to powerful damage. We’re trying to return it to that role with new mods that offer large amounts of damage, but the weak block chance of the original. Profane Ground also has all-new visual effects that echo the theme of the item. 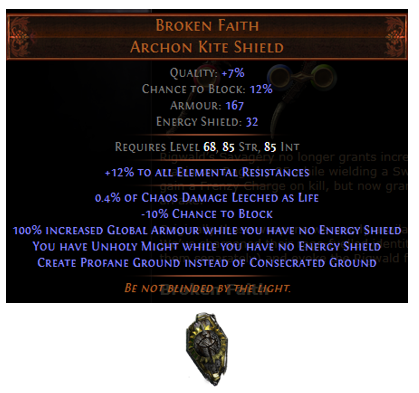 This unique shield can be acquired through the following upgrade paths or vendor recipes: