Brain Rattler is a unique Meatgrinder. It was rebalanced in the Path of Exile: Harvest.

Brain Rattler now grants 50% chance to shock enemies instead of 15%, and shocks as if inflicting 300% more damage in order to cause stronger shocks.

Another boss-exclusive weapon that has never quite seemed to live up to the fantasy it offers,

Brain Rattler is a weapon for people who want to go all-in on shocks with a melee build, as opposed to the spellcasters who traditionally invest in shock. We’ve powered up its shocking capability so that it can appropriately reward these builds. 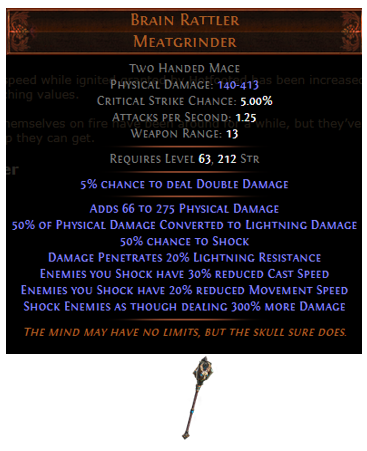 This item can be acquired from the following monsters: Guardian of the Minotaur.