Complete each of the following Encounters while under the effects of Harvest’s mist.

Harbingers are a type of immortal monsters. Harbingers summon enemies to fight the player while empowering them in different ways, and they can only be harmed by killing their minions. Harbingers can drop currency shards, for both ones seen in Wraeclast as well as their own currency.

There are several ways to complete Harbinger Encounters:

Scarabs are a type of map fragment. They do not open portals to new areas, but are instead used to augment existing areas with various effects.

Harbingers are invincible enemies that summon waves of enemies and summon new ones as they are defeated. Harbingers can also indirectly attack by empowering their minions, such as creating a

Righteous Fire aura around a monster or have all monsters use

Flame Dash. At higher levels, Harbingers can also summon Obelisks that can attack or power up their monsters.

A Sextant is a currency item that can be used on a Watchstone to add a special modifier to all the maps on the region where the Watchstone is socketed.

At map device, crafting maps with the Harbinger modifiers to complete this challenges. Before using it, you must complete map bonuses Objectives to unlock these modifiers. 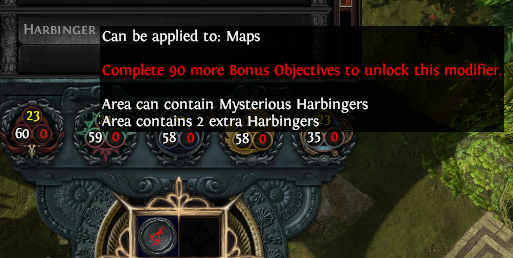 Zana can only be encountered in the wild in maps. When encountering Zana, she will give you a selection of randomly rolled maps to choose from, each with different missions.

Harbinger encounter: Runed Caverns node in the Azurite Mine.