How to Complete Blueprint: Repository

Blueprint: Repository can be taken to the following NPCs to inspect its layout. Initially, only one wing is revealed and some of the reward rooms and escape points will be locked. You can use one Blueprint Reveal and a payment of Rogue’s

Blueprint: Repository can then be taken to the Planning Table to assign your Rogues to it. Each wing requires three Rogues with the qualifying skills to be assigned to it. Assigning additional Rogues will increase the fee required to perform the Heist. You can then confirm the plans to lock in your plans. Once you confirm the Blueprint, you cannot reveal additional details or change your Rogue assignments. You can still modify the Blueprint’s affixes after you’ve confirmed the plans, however.

Blueprint: Repository to Adiyah, the Wayfinder.

Blueprint: Repository reward rooms. The target item, inside a Curio Display, will be a selection of Unusual Gems. You can only take one before Lockdown begins.

Unusual Gems are Alternate Quality Gems. A gem can have up to three alternate quality: Anomalous, Divergent, Phantasmal.

Unusual Gems provide even more depth for existing Skill and Support Gems. Each existing Path of Exile gem has up to three Unusual versions which grant different quality bonuses than the original gems. Some simply increase the power of the gem while others entirely change which builds most benefit from the gem. 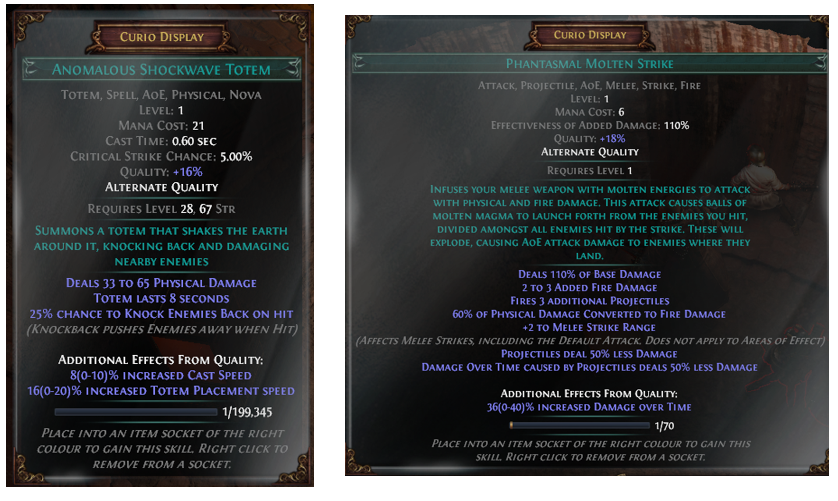