Timeless Splinters are found by defeating Legion enemies. 100 of the same splinters will upgrade to the corresponding Emblem.

How to use Timeless Vaal Emblem?

Timeless Vaal Emblem is a map fragment obtained by combining 100 Timeless Vaal Splinters. It can be used in the Templar Laboratory or a personal Map Device.

Orbs of Alteration, or 4

Timeless Vaal Splinter is a PoE currency item. Combine 100 Splinters to create a 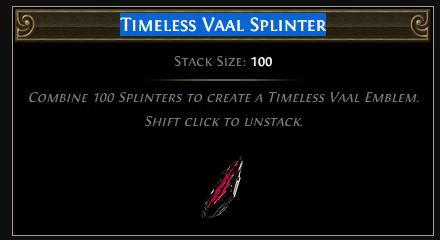