Breaches are timed monster-spawning portals. It will randomly spawn in an area in an inactive state. They’re easily identified by the hand-like construct within a purple circle (see image) and purple swirls can be seen within the vicinity. Walking into the hand will activate the breach. Breaches can also be spawned using

Vaal Breach, but enemies in these breaches do not give experience or drop items. 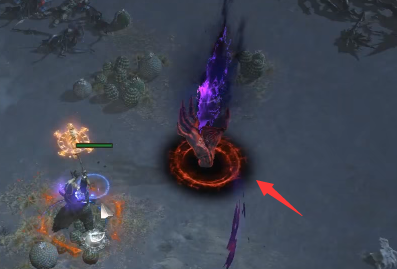 Active breaches will expand their circle outwards and spawn a mix of breach monsters within the circle; the faster the monsters are killed the faster the circle expands. After a while, the expansion of the breach will slow down until it eventually retracts quickly and closes.

Breaches stay open for a minimum of 30 seconds, increasing to a maximum of 60 based on how quickly breach monsters are killed. Normal monsters killed while in the breach do not increase the active time.

Monsters moving outside of the active radius will despawn after a short delay. During this time, however, it is still possible to attack and be attacked by the monsters before they’re removed. It is also possible for monsters inside the breach to hit the character while they are outside it.

Breach monsters have increased item rarity and quantity, but have a reduced chance to spawn beyond monsters and only rare breach monsters are able to drop maps. In addition there is a chance to obtain breach-specific unique items and splinters from these monsters as well as breach-exclusive Breach Rings.

Breaches also contain “Clasped Hands”, a breach-specific type of chest. They come in two varieties, “Clasped Hand” or “<Breachlord>’s Clasped Hand”. These chests can drop additional splinters and can only be opened when the breach expands to them. It is possible to see Breachlord specific Clasped Hands before opening the breach itself as a shimmering transparent object.

There are fives types of breaches each associated with a damage type, which will affect accordingly

Breach monsters are special enemies that spawn when drawing near a Breach portal. Unlike beyond demons, Breach monster’s leave corpses that can be exploited using skills such as

Raise Zombie. They cannot however be raised as Spectre’s using