PoE challenge: Defeat The Shaper without being hit by any of his or his clone’s non-Basic Attack skills. 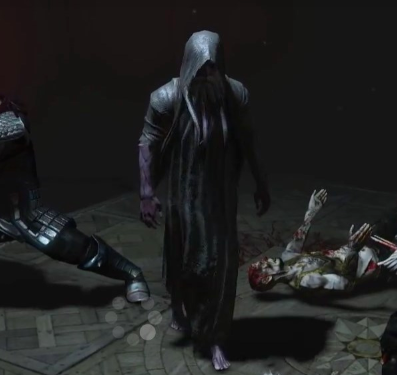 The Shaper’s Realm(Map Level: 84, Map Tier: 17) is an end-game map area where the battle with The Shaper takes place. Currently, it is the highest level area in the game.

The Shaper’s Realm can be accessed by combining the following four Map fragments in the Map Device.

The Shaper is one of the most difficult bosses in Path of Exile. His abilities deal very high damage and he has the highest health pool out of any enemy in the game. The fight consists of multiple phases. Before the Shaper encounter begins, the player must defeat four side bosses at the nexus. After that a portal opens in the middle to the Shaper’s arena. The Shaper himself has three phases. At the end of the first and second phases he sends Zana and the player to an area they must traverse with a boss waiting at the end. Killing that boss opens a portal to resume the Shaper fight. The Shaper recovers health slowly between phases.

The entry area is X shaped and contains four paths, each leading to a boss that must be killed before a portal in the middle opens. The bosses are four randomly-chosen map bosses. After they are killed, the Shaper fight can begin.

The Shaper uses the following skills, which he keeps in all phases:

Additionally, slow-moving cold balls spawn once every few seconds. They don’t do any direct damage, but once the player touches them, they create a vortex that permanently stains the arena until the phase ends. Stepping in such vortex chills the player and deals cold damage over time.

You are prevented from opening portals while fighting the Shaper.

Once the Shaper has been reduced to 50% health, he banishes Zana and the player and slowly regenerates life until both return.

The Shaper keeps all his abilities from phase one, and gets a new one: He casts a bullet hell of cold projectiles that deal heavy damage and are incredibly difficult to dodge, while he is invulnerable. When he does it, Zana teleports to the middle and creates a protective bubble that entirely blocks these projectiles. She doesn’t do this, however, if she’s recovering from losing all her health in the portal phase, so it’s important to keep her alive.

Additionally, the vortex balls spawn more often than in phase 1.

Once the Shaper has been reduced to 25% health, he once again banishes Zana and the player and slowly regenerates life until both return.

The Shaper keeps all his abilities from phase two, and gets a new one: He can summon an invulnerable, spectral double that uses one of his skills, which disappears after several seconds.

Additionally, the vortex balls appear significantly more often than in the previous phases, potentially making most of the arena unsafe and leaving very little room for maneuvering.

This is the final phase, and once the Shaper is reduced 0% health, he finally dies.

Between each of the Shaper phases, Zana and the player must traverse an area filled with monsters and kill a boss at its end. Those areas use randomly-chosen tilesets, and appear to be thin, floating islands in a sea of stars. Each of the bosses at the end are based on Riftwalker from the Laboratory Map, but have much higher health.

The Shaper slowly regenerates his health during the between phases, so it’s recommended to complete them as quickly as possible. Once The Uncreated/Unshaped is killed, this regeneration stops, and the between phase is complete.