Echoes of the Atlas introduces three types of Craftable Watchstones:

Titanium Watchstone. These valuable endgame items allow you to upgrade your Atlas and boost what types of rewards you find from maps. Players who are able to earn these powerful rewards will find that they are strictly better than regular Watchstones: they can be traded, don’t expire with use, and their benefits can stack.

The eventual goal is that you replace all of your base quest item Watchstones with the new craftable ones over time, as you upgrade your atlas. Note that each Watchstone is locked to a specific Atlas region. This will be indicated in the Watchstone’s name. The idea behind this is to prevent optimal gameplay involving constant shuffling of Watchstones around your atlas.

Because you can have up to four watchstones socketed in a region, up to eight mods can affect that region and some quite large bonuses to specific content can be stacked.

When combined with the Atlas Passive Trees, these really allow you to optimise what content you encounter, and the rewards from that content.

Another new endgame reward, The

Maven’s Orb, affects items that have two or more influence modifiers. When used on such an item, it randomly upgrades one of these influence modifiers and removes the others. If the modifier that’s being upgraded is already at the highest tier, it’ll upgrade to a new elevated tier.

It can upgrade any influence-specific mod. A tier 3 mod will be replaced with its tier 2 version, for example. If it selects a tier 1 mod to upgrade, it will replace it with a new “elevated” mod that has even stronger effects.

The elevated mods can be transferred with an

It doesn’t distinguish between different influence types in any way. For example, if you use it on an item with three Shaper modifiers and three Redeemer modifiers, it will still just pick one modifier to remove and one to upgrade at random.

Its rarity similar to the

This Vaal Regalia has two crusader influence modifiers on it, the percentage increased intelligence one and the physical damage taken as lightning damage one.

When we apply a

Maven’s Orb to it, it randomly removes one of these mods and upgrades the other one to become an elevated influence mod. In this case, it upgraded the increased intelligence mod to also have +1 to the level of socketed intelligence gems. The other influence mod was removed.

This opens up a mod slot of course, so it’s now possible to add another mod to it. Let’s use

Maven’s Orb crafting is only going to be performed by the upper echelons of elite players, and pushes the boundaries of the best items that are possible in Path of Exile.

As you complete the Maven’s Challenges, you’ll earn a new type of passive skill point that can be allocated on a special passive skill tree in that region of the Atlas of Worlds. Each of the Atlas’ regions has its own passive tree, and they generally have around 20 nodes to choose from. You can earn up to a total of 10 skill points per Atlas region. Note that there is an Orb that let’s you refund Atlas passives. 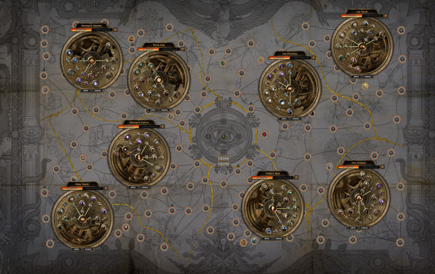 Take control of your Atlas by unlocking regional passive trees which augment the content you encounter and rewards you receive while exploring those regions.

Let’s check out some of the Atlas passive choices in the Glennach Cairns region.

This branch allows you to focus on Beyond – increasing the amount of experience granted by Beyond Monsters, but also allowing you to spawn more Beyond monsters really easily. The Torn Veil notable will drastically increase the quantity of Beyond Demons you can encounter.

The Legion branch has a notable passive which increases the amount of time you have to break enemies out, and makes it easier to break them out. It’s an example of a skill that you could invest into while you’re weak and then remove it later once you’re more powerful. 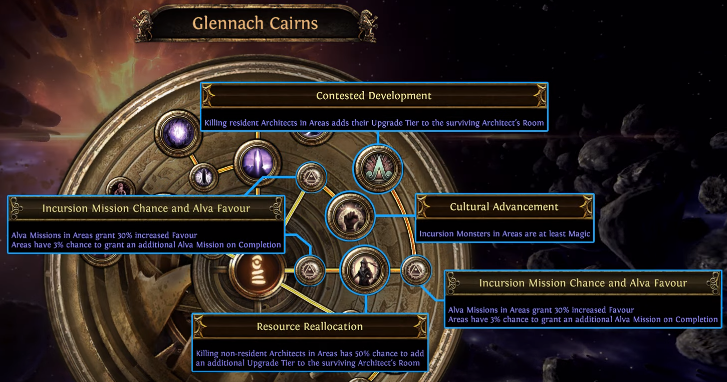 The Incursion branch allows you to more easily get higher-tier rooms in the Temple of Atzoatl and helps you make a definitive decision on whether to swap specific rooms.

On the Ambush branch, the Tamper-proof notable passive, upgrades all strongboxes to be rare and corrupted. This synergises incredibly well with the Ambush Zana Mod or prophecies like

Monstrous Treasure. While it prevents you from rerolling valuable types of strongboxes, the sheer number of corrupted 6 socket and 6 link items will certainly be tempting.