Olroth, Origin of the Fall

Olroth, Origin of the Fall Location

Expedition Logbook(Knights of the Sun)

Warning: if your aim is to kill the Olroth boss, it is recommended that don't put Remnant Mods before the boss, because the boss will inherit all the Mods before him. In that way, the boss is too strong to kill.

According to your builds, you should avoid one of the below mods. For example, if your main DPS is Lightning damage, you must avoid "Monsters are Immune to Lightning Damage". In case you have selected, the monsters will be unkillable. 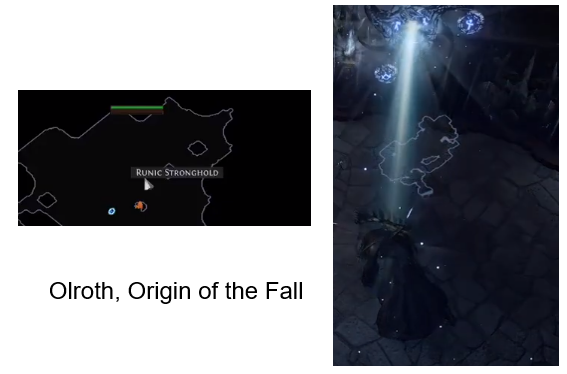 These kinds of fights are a real joy to work on. A lot of Path of Exile's boss fights consist of several phases with notable transitions and events that take place in each. The Olroth fight is a great example of this. You must reduce his health several times and destroy the Triskelion Flame before you are able to truly beat him. This gives us the opportunity to inject more character into the fight with special dialogue and sounds to signal transitions between phases. I am particularly happy with how his shield functions during the periods where he is invulnerable to damage. The effects here perfectly suited a sort of warbly, other worldly sound as your attacks fail to penetrate the shield. This sound was mainly made from pitch shifting subdrops and modulating them in various ways, giving a very strange sort of sound that occupies its own space and helps clarify that you are unable to attack Olroth during this time. Overall, we work very hard to try and communicate important elements during these encounters, which in itself can be difficult due to the immensity of things transpiring at any given time. Another example of this, is the charging up sounds on Olroth's sword and the way the Triskelion Flame charges up, these are intended to clearly indicate to the player when it's time to move. When designing audio for these complex fights, I make an effort to ensure that each element has some sort of unique sonic identity. This helps to balance the sound of the fight, taking away from the clutter. Using a balanced palette of tonal layers and foley, we can ensure we are communicating what we need to throughout boss fights.

Path of Exile: Expedition challenge: Defeat the Olroth, Origin of the Fall boss.