Itemised Metamorph Samples refer to the 5 types of items from the in-game Metamorph mechanics:

Three of any itemized organs can be sold to a vendor to receive a random organ differing from those offered, with random rewards. Thus, if the players lack Eye and Liver, they should use 1 Brain, 1 Heart and 1 Lung in the recipe to maximize the chance.

In fact, there are too many organ recipe combinations. However, if you lack one of their organs, you can use the following recipe:

Each map has a 10% chance to include a Metamorph encounter. The chance is not shared with Master nor Abyss, Blight, Breach and Legion, etc. In the encounter, certain monsters (and map boss) are marked with a green "arrow" on their bodies as well as marked on the mini-map, and the monster health and name bar have a green circle. Upon defeating these monsters, they drop organ samples which are automatically collected. With a full set of samples - Brain, Eye, Heart, Lung, and Liver - players can construct a Metamorph based on the combination they have used by spawning Tane Octavius and his Metamorph Vial using a button on the bottom right (PC default keybind: V). Tane spawns automatically once you've collected every organ in the zone.

Players can use any combination of a set of organs to create the Metamorph monster. Each organ determines the attacks the Metamorph uses, as well as the monster modifiers it has. Sometimes an organ will contain an additional item drop bonus. Moreover, a meter to the right fills based on sample rarity, which increases the monster's overall stats and item drops. Organs from higher rarity monsters will give larger increases to this meter. If the meter is filled as well as using at least one map boss sample, the Metamorph will drop an itemized organ sample, named after the name of the map boss, which can be placed in player's inventory. Note that in some case, even fully cleared the map, there are not enough rare and unique organ samples to fully filled the meter, due to external factor such as map rarity , map mod, map tier and pack size. Only one Metamorph boss can be constructed per instance, and only itemized organs can be transferred out of the zone instance. 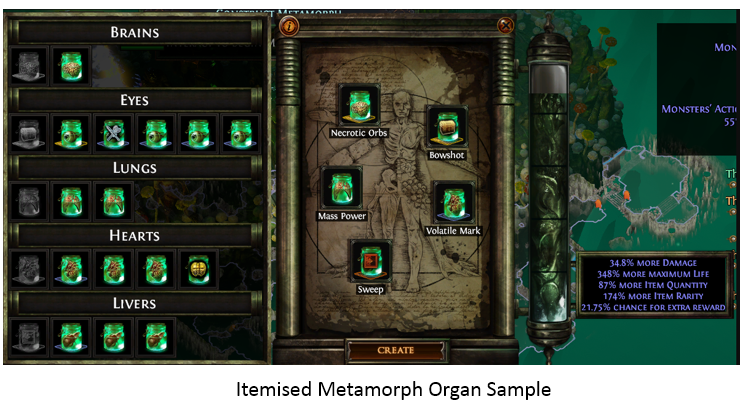