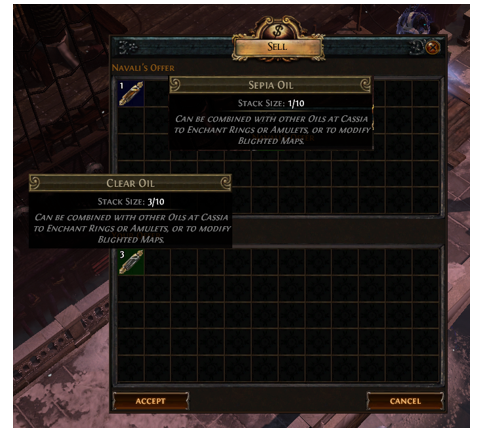 There are a total of 13 different oils that exist in the Path of Exile from tier 1 to tier 13. Oil vendor recipe: three of the same tier oils can be vendored for one next tier oil. For example, vendor 3 Clear Oil for a Sepia oil and 177147 Clear Oils for a Silver Oil. The tier of Golden Oil is 13. Therefore, in order to get a Golden Oil, you may need vendor 3^12 Clear Oil or 3 Silver Oils.

Use an Oil on an Amulet to allocate a notable passive skill from the passive skill tree without spending a skill point or connected to the rest of the allocated skill tree. Below is the spreadsheet for oils and you can save it.

There are 13 tiers for Blight oils. The price is different: you can obtain a Clear Oil for an

Orb of Alteration and a Golden Oil for 2 Exalted Orbs.

Now, Oils can be only dropped from Blight encounters. You can craft a map with “Area contains an additional Blight Encounter” modifier at the Map Device.

Oils can be applied by the player via Cassia, to Blighted maps, rings, amulets or blight unique items in order to add new modifiers or the effect of a passive skill:

Blighted maps can have up to three anointments at a time.

Anointments on equipment take up the enchantment slot.

Allocated passive nodes on the Amulet behave as if the node were taken manually. In other words, socketing a Timeless Jewel and anointing a passive node will grant the new, transformed modifiers. It will not grant the old, original modifiers.

Three units of oil can be vendored to create one vial of oil of the next tier, much like essences. For example, one Golden Oil will require 3^11=177147 Clear Oils. As such, it should only be used when one has a vast excess of one type of oil or needs a small amount of another type.

Sister Cassia is an NPC who introduces the player to Blight encounters. She can randomly be found in maps. After encountering her for the first time, she can be invited to your hideout. 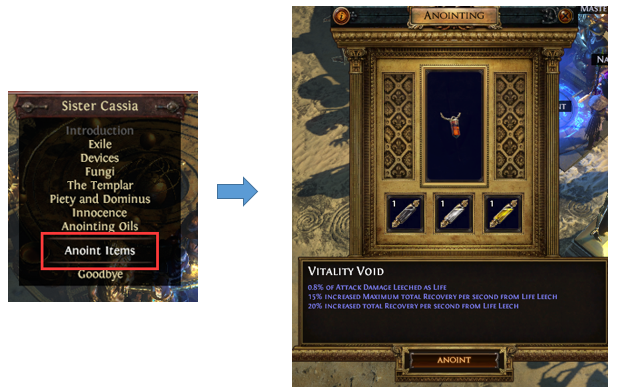