Jagged Fossil is a fossil type. Fossils are a special type of poe currency introduced in the delve league that can be socketed into resonators to modify the crafting behavior in specific ways. Fossils can also add special Delve modifiers.

Farming Jagged Fossil in Azurite Mine

The drop location of Jagged Fossil is Azurite Mine. Standing on any Waypoint, click the flashing candle icon: "Click to travel to the Mine Encampment", then you will go to the Azurite Mine.

There are two ways to obtain Jagged Fossil.

Sometimes, Niko the Mad sells a Jagged Fossil for 1 000 Azurite. Niko is one of the five masters. He provides introduction to delves and appears when harvesting Voltaxic Sulphite. He also sells Fossils and Resonators for Azurite.

2. It can be dropped from the Biome: Petrified Forest

In addition, you can also exchange currency items for it. The price of Jagged Fossil is an Orb of Alchemy. You can buy cheap POE currency from below:

How to use Jagged Fossil?

Place a Jagged Fossil in a Resonator to influence item crafting. Effect:

You can use this fossil to craft a helm item. The Suffix "of the Underground" mods:

Spawn Weight Multipliers: Using this fossil multiplies the spawn weights of all modifiers with chaos tags by 0, poison tags by 0, bleed tags by 5, and physical tags by 10. 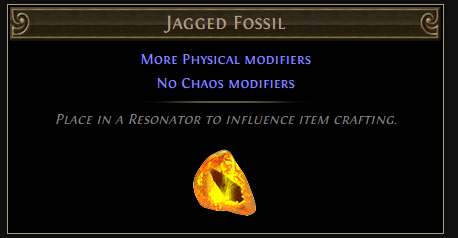