Hotfooted is a unique Viridian Jewel. This jewel was rebalanced in the Path of Exile: Harvest.

The movement speed while ignited granted by

Hotfooted has been increased from 10–15% to 10–20%, and attack and cast speed mods added with matching values.

Builds that set themselves on fire have been around for a while, but they’ve never exactly broken the meta. We want to give pyromaniac exiles all the help they can get. 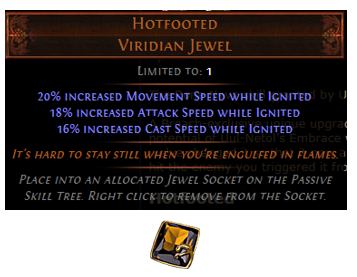 You can only put one

This jewel can be acquired through the following upgrade paths or vendor recipes: