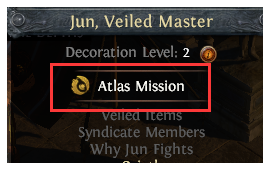 Zones do not repeat the same type of encounter. Maps will always have a Research, Intervention, and either Fortification or Transportation as encounters.

How to Get more Syndicate Safehouses Missions

Each day five new master missions (1 for each master) at will be added to the player’s accumulation after the reset at 0:00am (GMT+0) based on the tier (white, yellow, red) of the player’s last completed map. The map must be completed the day before in their own map device. Completing party-play maps from other players map devices does not count.

There is 35% chance (on average 7% per master) to have additional master mission from completing the map.

Use Prime and Awakened Sextants for chance to roll “Area contains Jun”.

A Master Seeks Help: You will find Jun and complete her mission.

When raiding a Syndicate Safehouse, the Safehouse leader and all his/her subordinates will defend it. Once they are defeated, the ‘living quarters’ are unlocked. The ‘living quarters’ consist of rooms with Safehouse Stashes that contain loot depending on which members were stationed in the division raided. Certain members will have special crafting benches rather than Stashes in their rooms. The Safehouse leader’s room will contain two chests or crafting benches instead of one. The notes on the syndicate pages will give a hint on what reward can be expected. See the below table for both the hints and the exact reward.

In addition to these, Safehouse leaders have a chance to drop certain Betrayal-specific Veiled Uniques.

Each known Syndicate member on the board will display the following: Rank, Task, and Items. 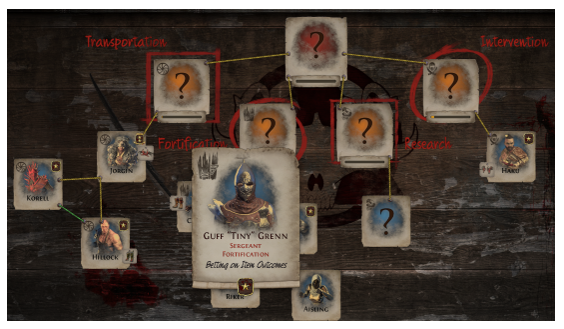 Ranks are indicated by the number of stars on the top right, going up to 3 stars (Sergeant, Lieutenant, Captain). Higher ranks give greater rewards, but also makes them tougher by giving them additional items. Rank can be raised by killing them, while interrogating them lowers it. A member must have at least 1 star in order to be assigned to a division and have their reward appear at the safehouse. If a member’s rank falls to 0, they will become unassigned.

Tasks are indicated by the text on the bottom. These tasks depend on which division the member is located in. This indicates their reward at the safehouse.

Members can have items attached to them. This simply indicates additional modifiers they are given when fighting them. Higher ranked members are more likely to have more items on them.

Each division has a leader. Leaders do not appear as primary targets and will only appear to help or hinder another member. Leaders drop double their safehouse rewards and are also present during the Mastermind boss fight, where they drop their safehouse rewards as well. If the leader loses their rank via negotiations by other members or gets interrogated, they will be replaced with someone else.