Expedition Logbook (Search), craft its mods like a map, bring it to Dannig and choose a location for your next Expedition. These Expeditions are much larger than regular ones and harbour many mysteries to explore, if you dare.

Increase the drop rate by adding these Remnant Mods:

Modifiers from Remnants are applied to Monsters and Chests that are excavated from the explosive that destroys the Remnant and all subsequent Explosives.

Here is an example of the Cavern Entrance icon. You must circle the Entrance into your explosive range. 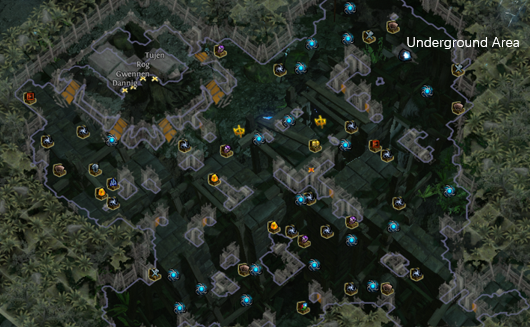 The other best mods are Area contains an additional Underground Area, and Excavated Chests have a (5–20)% chance to contain twice as many Items. 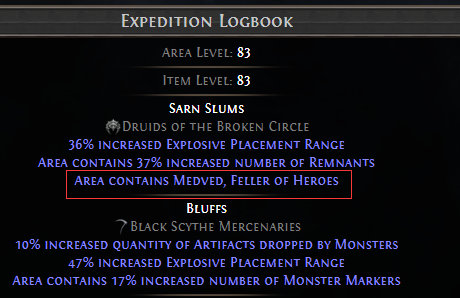 Expedition Logbook can be rolled to have a set of explicit mods, like an endgame map. Each location within the logbook has its own implicit mods, as well as a theme that controls what types of remnants can be found there.

As the following example shown,

Orb of Alchemy upgrades a normal

Expedition Logbook to a rare

How to use an Expedition Logbook

Talk to Dannig in your hideout and give him a logbook you have found and go on an Expedition to one of the locations it describes. These are all exotic places that no Exiles have ever travelled to before.

Just like how a Blighted Map was one giant Blight encounter with no natural monsters, the Expedition you go on from a logbook is one giant Expedition.

Expeditions from logbooks are not only different because of their large size, but because there are special objects that you can interact with using the explosives. For example, trees that contain monsters or items, passageways that reveal chests or bosses, and so on. Speaking of bosses, there are some formidable ones for you to seek out, and a set of valuable new unique items and base types that can only come from Expedition content.

While planning your chain of explosives in a Logbook Expedition, you should consider detonating various destructible objects. Such obstacles might be blocking secret passages leading to ancient, terrifying bosses and their valuable treasures.

Complete an Expedition in each of the following Logbook Sites.

Unearth and enter each of the following areas in Logbook Expeditions.

Complete any four of these encounters the specified number of times.