In Heist, players travel to the rogue harbour to hire a crew of thieves to help them plan and execute risky heists, working towards a thief’s ultimate goal – pulling off a Grand Heist.

The following is the Heist changes in PoE 3.13

In Echoes of the Atlas, rogues level up their skills faster, markers drop with higher stack sizes and quest contracts are now dropped for you at the next smuggler’s cache as soon as that quest is available.

PoE 3.13 integrates Heist expansion into the core game as optional side content, with a few improvements.

3. All progress items are tradeable

One great aspect of Heist in PoE 3.13 is that all of its progress items are tradeable, so if you’re focusing on other content, you can trade away your contracts until you’re ready to go on some Heists. 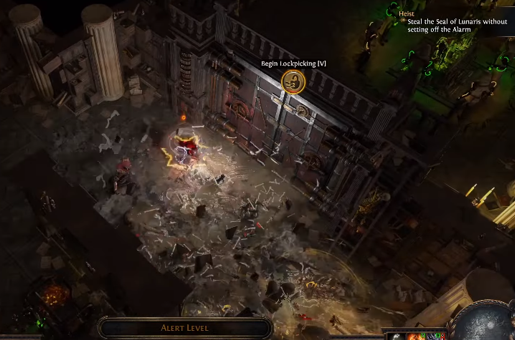 In Heist, the meta for getting the most value out of the system centered around ‘splitting’ valuable blueprints and running them infinitely for massive amounts of currency. In Echoes of the Atlas, you can still split copies of Blueprints. However, the copies are no longer fully revealed, requiring you to acquire and spend reveals and markers again in order to maximise their rewards. Rewards from contracts and blueprints have also been rebalanced.