Cast when Stunned Support gem causes a linked spell to trigger when the player is stunned or blocks a stunning hit. Requires Level 38.

Each supported spell skill will have a chance to be triggered when you are stunned. Cannot support skills used by totems, traps, or mines. Vaal skills, channelling skills, and skills that reserve mana cannot be triggered.

(50-69)% chance to Trigger Supported Spells when you are Stunned, or. Block a Stunning Hit. You cannot Cast Supported Triggerable Spells directly. 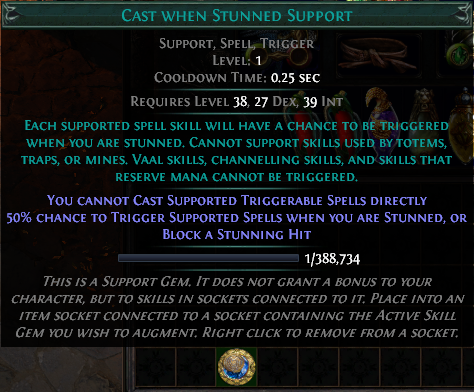 Cast when Stunned Support VS Cast when Damage Taken Support

Cast when Stunned has several advantages, which may tip its balance in its favour, depending on your character’s build:

Cast when Stunned targets the enemy which stunned the player. Spells that don’t have targeting, like

Ice Nova, will be cast on the character as usual.

After that the global CwS cooldown occurs, which is currently 250ms. Getting stunned during cooldown time will not cause any supported spells to activate, even if you have multiple CwS groups.

The price of Cast when Stunned Alchemy is an

Orb of Chance. This gem can be bought at the listed NPC vendors, after completing the following quests:

3. Buy level 21 Cast when Stunned Support gem from other players

Cast when Stunned Support is about 10

The drop level of Faster Cast when Stunned is 38. You can get it by killing enemies, opening Gemcutter’s Strongbox.

The following unique items are related to