Sanctified Fossil is a fossil type. Fossils are a special type of Path of Exile Currency introduced in the delve league that can be socketed into resonators to modify the crafting behavior in specific ways. Fossils can also add special Delve modifiers.

Farming Sanctified Fossil in Azurite Mine

The drop location of Sanctified Fossil is Azurite Mine. Standing on any Waypoint, click the flashing candle icon: "Click to travel to the Mine Encampment", then you will go to the Azurite Mine.

There are two ways to obtain Sanctified Fossil.

Sometimes, Niko the Mad sells a Sanctified Fossil for 100 000 Azurite. Niko is one of the five masters. He provides introduction to delves and appears when harvesting Voltaxic Sulphite. He also sells Fossils and Resonators for Azurite.

In addition, you can also exchange currency items for it. The price of Sanctified Fossil is 5 Chaos Orbs. You can buy cheap POE currency from below:

How to use Sanctified Fossil?

Place a Sanctified Fossil in a Resonator to influence item crafting. Effect:

Is Sanctified Fossil worth crafting it?

With percentage rolls, such as critical strike chance, lucky/unlucky rolls will be up to a 100% more/less modifier, changing linearly towards 0% as critical chance increases. As for damage rolls, the average damage from the roll will be at up to 33% more or less, when the minimum damage is close to zero, but will have a much weaker effect when the minimum damage is closer to the maximum.

Sanctified Fossil Crafting Worth it?

Sanctified Fossil is about 5

Chaos Orbs. From my experience, it is a complete waste. The other fossils are all at about 2

Chaos Orb, it’s more convenient to try without a

Sanctified Fossil has yielded anything remotely decent for me. In fact, the items I’ve rolled with Sanctified Fossils come out so incredibly terrible that it kind of seems broken. Like maybe they accidentally made them do the opposite of what they are supposed to do? I have tried to roll a minion weapon with a 4 socket resonator sanctified, bound, jagged, and shudder I have tried to do so about 20 times if not more, and every single one has come out with none of the possible fossil mods in fact completely different mods than what is expected with that combination, and absolutely horrible rolls numerically. It’s almost like its bugged. Maybe it’s just simply a bad run of RNG but In delve league every single time I used the same combination with a sanctified fossil I got awesome results, including most of the fossil mods implied and very decent if not excellent numeric rolls, and in delve I would find sanctified fossils way more often. Kinda sad really, delving was a great addition to crafting, but still glad they added it to the core game, even if its kind of nerfed. 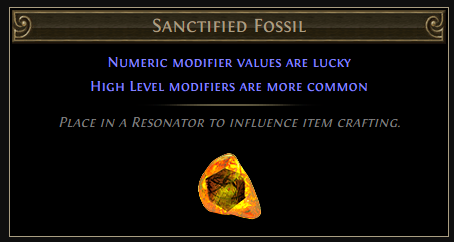