Allocate a Major God Power is a Harvest challenge.

How to Allocate a Major God Power

Killing one of the following bosses, you will allocate the related major god power.

How to see Major God Power

Talk to Sin and Open Pantheon. 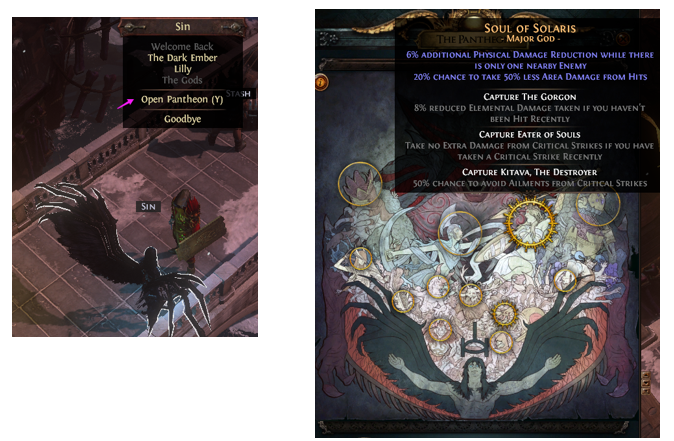 You can unlock new Gold Powers by defeating them in battle and can enhance these Powers by capturing the souls of certain bosses in end game maps.

You can only change which God Powers you have active when in Towns or Hideouts.

There are twelve gods that each grant a power; four major gods and eight minor gods. A player can only have one major and one minor power activated at a time. The bonuses can be freely swapped with no extra cost, as long as the player is in a town or hideout.

Upgrading a god’s power requires consuming a Divine Vessel and any map, with a boss that can upgrade a pantheon power, in the Map Device. Strengthening the Map Boss, killing it allows the retrieval of its Captured Soul from the Map Device. These are used when speaking to Sin to unlock the secondary powers. Once this is done you will simultaneously get that captured soul’s buff as well as the baseline god’s buff. This means, in total, you can get up to 4 simultaneous buffs from a Major god, and 2 simultaneous buffs from a Minor god.