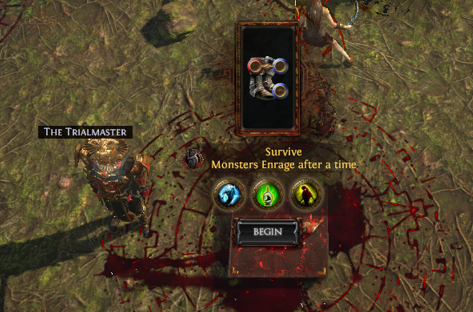 Survive: Don't die until the timer runs out.

One of the following situations means Survive failed:

The Ultimatum is failed and all rewards will be removed.

To survive, movement speed is king. This is the easiest encounter in Ultimatum.

For low level players, Quicksilver Flask is one of the best choices. It incrases 40% movement speed.

Let's move on and take a look at completion rate by encounter type.

So, the first thing you'll likely have noticed is the completion rate of Stone Circle encounters. It has the lowest completion rate of any of the encounter types and it's not even close. This encounter type either forces players to stand still for brief periods of time or can last a long time if players are running quick paths through the Stone Circles, giving more time for something to go wrong and lead to an untimely death.

The easiest encounter type is the Defend the Altar encounter. This is fairly expected as not all of the monsters are trying to kill you; they're instead trying to destroy an altar, giving you a bit of extra breathing room during the encounter.