Whakano sells heists at Rogue Harbor. Before level 50, he sells normal heists for

Orb of Transmutation and magic heists for

Orb of Chance. After level 50, he sells normal heists for an

Orb of Chance, and magic heists for an

How to refresh Whakano’s stock? 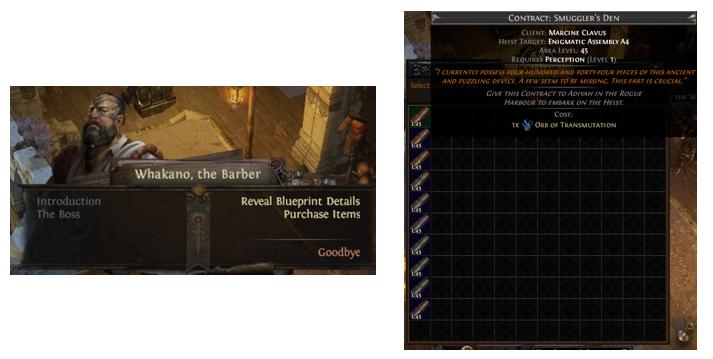 For a small fee, he will allow you to unlock more features in your blueprint. You can plan your Grand Heist ahead. Reveal the best escape route and best room for your looting.

A Blueprint can be taken to the following NPCs to inspect its layout. Initially, only one wing is revealed and some of the reward rooms and escape points will be locked. You can use one Blueprint Reveal and a payment of Rogue’s Markers to reveal details of it.

A revealed Blueprint will indicate which rewards are available from Curio Displays(Grand Heist reward rooms) but you won’t be able to tell what rewards are in chests, lockers and side-rooms along the way. Any unrevealed wings or rooms will not spawn when performing the Grand Heist.

Tala moana and good tidings! I'm Whakano, though most people know me as the Barber. If you need a trim and tidy then take a seat. But a little fishy told me you may be more interested in a conversation than a cut.

A man like myself, travelling around as much as I do, hears a lot of things. Everyone needs their hair cut once in a while, and I am a very attentive listener.

Some of the things I hear could be very lucrative to people with certain, shall we say, unscrupulous ambitions.

Drop a few markers in the tip jar, and I may accidentally drop some of my meticulously well-kept notes.

Interesting man. Very interesting indeed. Hairless as the day he came into this world. No need for a man of my trade, you see. Yet, bald as he may be, he knows the value of a good barber.

No one here knows much about the Boss's past, except maybe Kurai, and she won't tell you much, not even for a mountain of markers. Loyalty is the most valuable currency, and she and the Boss have a lifetime supply.

I tried to find out what I could. Conflicting tales of a smuggler kingpin, a Theopolan aristocrat, and, strange enough, a retired arena champion. Then Kurai told me to stop sniffing around, else I end up like the last barber. Or maybe she said I'd end up {the} last barber. Either way, I value my life and my work more than I value gossiping about an old, bald, gladiatorial smuggler.

Troubling news coming out of Oriath. I know you weren't just involved, but smack-dab in the middle of things. I also know you aren't to blame. Not directly, anyway.

Still, you might imagine that I feel some... animosity about the whole situation. Not least of all because the presence of Kitava is quite literally a doomsday scenario for my people.

I trust you'll sort it out, 'cause if you don't, we're through. And I don't just mean no more business.

Well, at least you followed through eh? I'd have preferred if my gods stayed tucked away neatly in their tales, but if we're going to have the Ravenous One up and about, at least we have you to put him back to bed for good.

Listen, I don't want to be a nay-sayer, but before you started coming around here, we didn't have none of this god nonsense. They were just characters in stories. Ways to get the kiddos to eat their greens. And that was fine! In fact, I preferred it that way!

Now? We've got characters coming to life! And then you're killing 'em! You're killing our heroes! Tukohama was one of the good guys! You better finish what you started.

The rebellion was a long time coming, if you ask me, which you did. And if you ask me, which you didn't, I reckon the bloodshed was inevitable. The gods rising up? That one, I will admit, took me by surprise. So now the Karui are sailing back home -- good. But anger has a tendency to linger like a bad smell, and the enslaved are justifiably angry. It may take a long time before that anger fades. It may never.

Sadly, no. Slavers have had their pride badly bruised. They're out there -- right now -- looking for Karui men, women, even children, and kidnapping 'em. No one's heard from the taken since. You think they're getting sold to new owners? Not a chance. They're being tortured. Murdered. The slavers see this as revenge, but it is nothing more than evil for evil's sake.

A lot of bad things have come from the rise of Kitava, but this... for me, this is the worst.

Kitava's rebirth has heralded countless tragedies, but there has been one shining light to come from it -- the unshackling of my brothers and sisters. Freed Karui slaves were among the first survivors to reach the shores of Wraeclast. I watched them kiss the sand, sing, dance. I watched them finally enjoy the freedom they should have had all along. Then it started coming unwound.

Wish I was surprised by this turn of events. I really do. This is just another line on a page, in a book writ only of atrocities against the Karui people. I fear this is not some aberrant event, but is the beginning of a pattern.

I appreciate your effort, though. I will stay vigilant. I hope you do, as well.

I will send a message to Hapihapi's friends and family. They will give him an honourable send-off.

Sometimes I hate being right. Hapihapi's kidnapping was followed by a string of similar kidnappings. All Karui, some barely old enough to walk. Even in this time of madness and upheaval, as dead Oriathans are still being put to rest, slavers are taking my brothers and sisters. Different ships, but the methods they're using are too similar to be coincidence. Someone is in charge of this, and I want to know who.

The Oriath Records Office holds a lot of documents, including sales records of slaves, slaver licenses, and records of the whereabouts and ownership of every known slave. Get me those documents.

Many thanks, Exile. Leave these documents with me. I'll send a few little fishies upstream and see what they come back with.

Here's the thing about slavers; without the blessing of the Templar authorities, they collapse under pressure like a sandcastle.

My little fishies have come back, and they've brought with them a name: Friedrich Tarollo.

Not surprised you haven't heard of him. He was small-time. But even in a career known for callousness and cruelty, Friedrich was a real bastard. Loved the chase. Loved the struggle. Left his mark on the backs of many of my brothers and sisters.

It seems he has holed himself up in a cave somewhere, declared himself the supreme ruler of the slavers, and is enjoying the lawlessness Oriath's collapse has brought to a sickening degree. Find him and bring him to justice.

I heard the news, Exile. Tarollo is dead. The message is loud and clear to those who care to listen; the Karui are a free people, and will not bend to threats and terror, not now, not ever.

But what you found there... If Tarollo can use it to fuel his hate, maybe it can be used for protection. Yet... Just being near it unsettles me. I don't know what it is, but it needs to be in safe hands.

I'll hold onto it for now. I don't trust anyone else with it, not even you. Sorry... and, I suppose, thank you.