Oddly enough, these unique boots let the enemy escape you. Sadly, no one wants this to happen, because the goal is to kill the entire pack to get more loot. Instead, each time the character moves,

Wake of Destruction now leaves a trail of “shocked” ground. The enemy standing in it will suffer more damage. 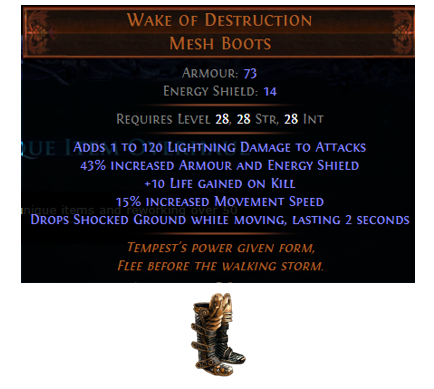 In the video below, you will see an example. The

Lightning Warp from Moonbender’s Wing is procced by

Lightning Strike. All the while,

Wake of Destruction electrifies the ground underneath you (including your teleportation path) and debuffs enemies to take more damage. Think of this as a fun way of breezing through a level while also taking out lots of opponents.