Rigwald’s Command is a unique Midnight Blade. It was rebalanced in the Path of Exile: Harvest.

Rigwald’s Savagery no longer grants increased attack speed with swords or chance to bleed, but now has a new mod that increases your maximum Rage by 25 while wielding a Sword. Rigwald’s Command no longer grants increased physical damage with axes or chance to gain a Frenzy Charge on kill, but now grants a multiplier to your bleeding damage equal to the amount of Rage you have while wielding an axe.

Originally these weapons were only available as a rare drop from the Rigwald encounter and they’ve lost their edge as time has passed. We’ve sharpened their rage-fuelled identities with new mods that synergise with each other (though of course you’re also free to use them separately) and evoke the Rigwald fight. 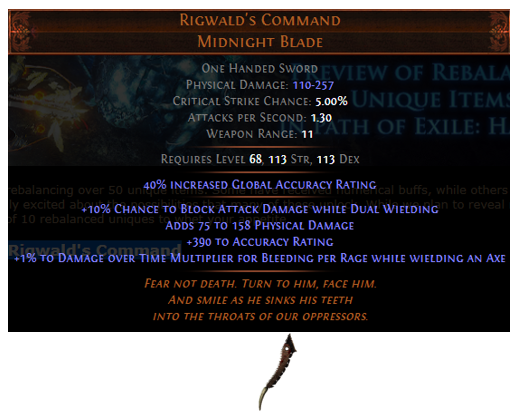 How to get Rigwald’s Command

Rigwald’s Command could only drop from a level 75 or higher Rigwald, the Wolven King. Since Talismans are currently not in the game, the only way to get them now is through specific divination cards.