A Sanctum run contains 4 floors, each containing 8 rooms. The 8th room of each floor always contains a Boss. Players can choose to engage in a room every time they encounter the portal to the Sanctum in an area or map, or defer up to 8 rooms (1 floor) to be run consecutively at a later time. Crashing during a Sanctum room will reset progress for that room and will resume the same area on your next map. Aureus and rewards are only locked in upon successful completion of a room. Each Sanctum run is independent between characters on the same account.

Each room other than the miniboss room contains several Guard unique monsters, as well as one of three tasks to complete the room:

Note: most "Find the Exit" rooms have shortcuts that require movement skills.

Note: All room types other than boss rooms can become Afflicted. Afflicted rooms are indicated by a purple border and cause the character to gain an Affliction on entry.

When players are offered rewards, they have three options:

The quantity and/or types of items improve based on the area level of the zone and how long you defer the reward, at the cost of risking the reward entirely if the player fails the run. Item chests have a 5 Aureus fee.

Fountain rooms contain an interactable Fountain which grants Recover 25% of Maximum Resolve for a 5 Aureus fee.

3.20.0b Patch Notes: Improved the warning text that is displayed when you try to enter the final reward room in Sanctum.

The Sanctum’s rooms hold many secrets. Some contain ancient fountains you can rest at to restore a portion of your resolve.

Others will curse you with an affliction, hindering your progress. These afflictions stack up as you explore deeper and deeper within the Sanctum. You can also receive boons, blessings that help you overcome the Sanctum’s dangers. Each time you enter the Sanctum, you will encounter a unique layout that you must assess and adapt to as you explore. 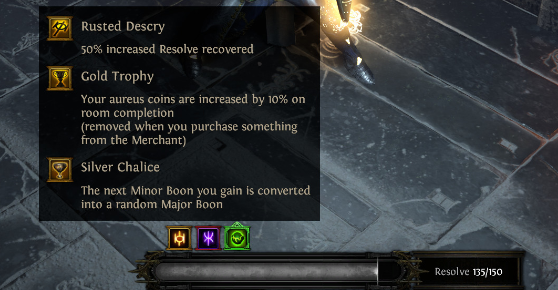 We didn't announce this in the livestream, but we can confirm that you will be able to save up consecutive Sanctum rooms (up to a limit of eight total - one entire floor), to play later.

Can we have a way to accumulate Sanctum rooms and attempt them back-to-back?

Yes, you can accumulate up to eight rooms (the size of a full Sanctum floor) before running some or all of them at once.

What happens if I crash while in The Forbidden Sanctum?

When you play your next map you'll be able to replay the same room you were up to. Aureus coins and rewards are only locked in upon successful completion of a room.

Is your Sanctum run shared between characters? i.e. can you run different rooms of your run with different characters?

Each of your characters has its own Sanctum runs and progress within them.